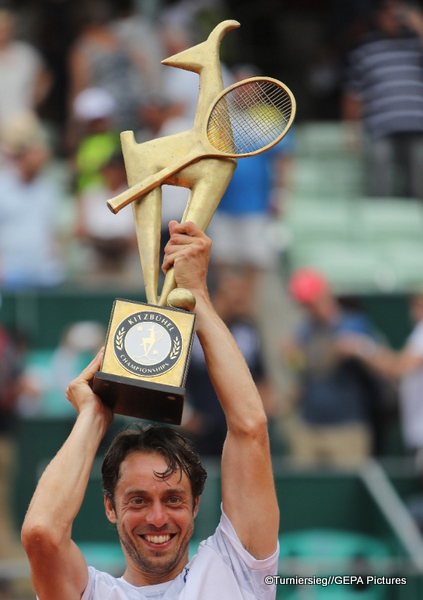 The Italian’s only other final came in March 2014 when he lost in Sao Paulo to Federico Delbonis. At 34 years, 7 months, he has beaten the record set by Victor Estrella Burgos in February 2015 for oldest first-time winner on the ATP World Tour. Estrella Burgos was 34 years, 6 months when he won Quito.

The 123rd-ranked Basilashvili made some history of his own by becoming the first player representing Georgia to reach an ATP World Tour final.

“Winning one trophy was a goal for this year, so it’s great for me. I hope this is not the last,” said Lorenzi. “I’m changing a lot. I need to be more aggressive and improve a lot of things, so this is just the start.”

“I couldn’t handle my nerves today,” said the 24-year-old Basilashvili. “I was very tight, very nervous. I couldn’t handle the pressure, but I think I played great this week and we’ll see for the future.”

“This is a present for me. I think it was a fantastic week,” said the winner. “Today I was playing really good. I am really happy with this win.”

“I think it was a great week for both of us. He’s a lot younger so he will have a lot of time for winning,”

Lorenzi is the first player this year to win both an ATP World Tour and ATP Challenger Tour title, winning Challengers in Canberra and Caltanissetta.

He is the third-oldest champion this season on the ATP World Tour, behind 37-year-old Newport winner Ivo Karlovic and Quito victor 35-year-old Estrella Burgos.