You are here: Home / Contributors / Johanna Konta Serves Her Way Into Her First WTA Final 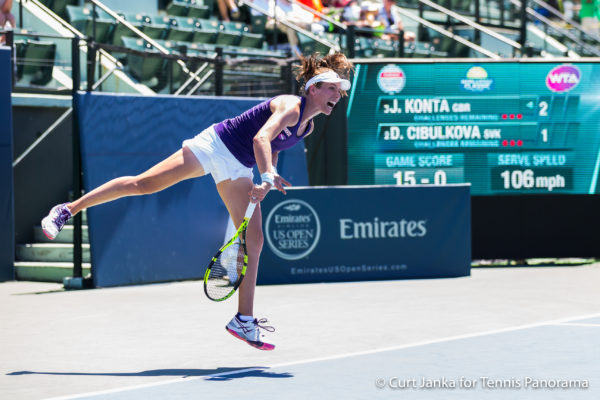 (July 23, 2016) STANFORD, California – Johanna Konta lost just six points on her serve as she toppled Dominika Cibulkova 6-4, 6-2 in the first semifinal of the Bank of the West Classic. The win earns Konta her first WTA final and it’s the first time a British player has played for the trophy here since Virginia Wade in 1981.

The third seed Konta served a total of nine games and held at love for six of them. Cibulkova, the second seed and 2013 champion, is arguably one of the better returners on tour, so what made Konta’s serve so tough today? “She was placing the serve so well and it was hard for me to do something with it,” the Slovak Cibulkova answered. “She was changing the directions of the serve, so that was the main thing. Today she was just serving too well.“

The 25-year-old British woman, currently ranked No. 18,  backed up her serve with solid ground strokes and returns, breaking her higher-seeded opponent three times. After the match, she was pleased with her performance. “I’m really happy to have come through that and to be into my first final,” Konta said. “I thought I served well and did a good job in the end of staying in the present. She [Cibulkova] is an incredible competitor, so I knew going into the match that I was going to have to be there for every single point. I achieved that, so I’m feeling very grateful and looking forward to my next match tomorrow.”

Konta was also playing in the doubles semifinal with her partner, Maria Sanchez, against Darija Jurak and Anastasia Rodionova. Konta will play Venus Williams in the final. The two-time Stanford winner beat Alison Riske in the night session.

“I’m really happy to have come through that and to be into my first final,” Konta said after her win.