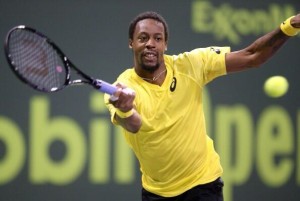 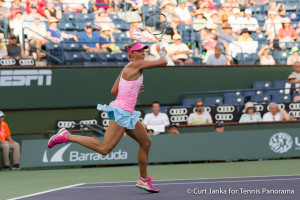 The 37-year-old almost seven foot Karlovic of Croatia, coming off a tournament win last weekend in Newport was trying to become the oldest man since 1973 to win back-to-back tournaments.

Gael Monfils was about to be “served” out of the Citi Open final on Sunday when Ivo Karlovic led 7-5, 5-4 about to serve for the title. Karlovic who hadn’t lost her serve the entire tournament, found himself broken twice within the next four games, which turned the match around for the Frenchman.

The title, which is Monfils’ fifth, was his first trophy in almost 2 1/2 years.

“To be honest, today was pure luck,” said the winner.

“And then after that, I was dead. I couldn’t move anymore.”

“It’s a real pleasure for me,” said the 29-year-old Monfils. “When I first came, I saw big names like Arthur Ashe and Yannick Noah and I said ‘I want to have my name next to them’. They have been big inspirations for me. Every time I come here, the crowd has been really great to me and amazing.”
“I was going to win and I lost my serve,” Karlovic said. “That is tennis. Of course, every match you have a little bit of pressure. I’ve dealt with that in many matches and usually I’m able to get over it. Today I couldn’t. But it was a great week.”

On the women’s No. 7 seed Yanina Wickmayer of Belgium won her fifth WTA singles title, besting 122nd-ranked Lauren Davis of the United States 6-4, 6-2. Not only did the Belgian win the singles, but she won the doubles title teaming with Monica Niculescu, becoming the third woman this year to double up at an event.

“It’s such a great feeling to win titles and to hold that trophy at the end of the week,” said No. 44 Wickmayer. “Being able to hold two trophies this week has been great.”

The 22-year-old Davis will jump into the top 100 by making her first WTA final.