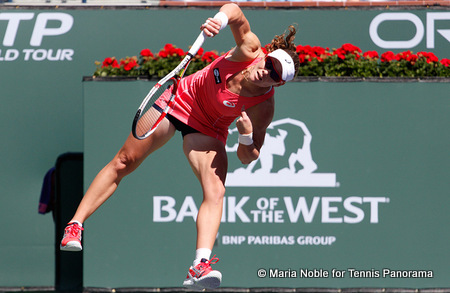 (July 25, 2016) MONTREAL – In a day interrupted by numerous rain showers, former 2012 winner Petra Kvitova and 2011 finalist Samantha Stosur have advanced to the second round of the Montreal Rogers Cup.

Kvitova, seeded 12th, has been coming off a difficult 2016: the two-time Wimbledon champion, who usually excels on grass, failed to win two matches in a row in any of her three grass tournaments. For her first match on North American hardcourt, she was facing difficult humid and heavy conditions, which have proved difficult for her in the past. Also, her opponent, qualifier Magda Linette, was coming off an impressive win against Sabine Lisicki this weekend and had pushed Venus Williams to a third set last week in Stanford. On paper, the upset looked possible.

But that was underestimating Kvitova, who is known for coming out with dominant performances when they are least expected. Right from the get-go, she looked like the player who won this same event in 2012: incredibly powerful in every aspect of the game. Her serve was especially on point today, not allowing one single break point to Linette in the 6-1 6-2 win. There was just nothing the Pole could do in, and Alizé Cornet or Andrea Petkovic will have a lot on their plate in the second round if Kvitova keeps that consistent level of play.

Samantha Stosur, who reached the final at the Rogers Cup in 2011 right before her US Open win, was also facing tough competition in Heather Watson. The Brit, who was just coming from her inspiring mixed doubles title in her home slam at Wimbledon, has had success on hard court this year, including her third WTA title in Monterey. Stosur, the 13th seed, drew first blood taking an early 5-3 lead, before feisty Watson leveled the match at 5-all. The Australian, who relies on her heavy forehand and trademarked kick serve, upped her aggression which proved to be too much for the more defensive Watson. After closing the first set 7-5, she broke three times in the second set to wrap up this first round in two sets.

“I thought it was pretty good (performance) considering we had to wait a long time to play,” said Stosur. “Sometimes it’s hard to kind of find some rhythm, you know, get really good energy out on the court after you’ve been sitting around for a long time.

“I was quite pleased overall with how I played. There’s obviously things you want to do better. But to get through that in straight sets, I’m pretty happy.”

Stosur noted the keys to her win:”I feel like when I was able to go back behind her to her backhand, that worked well. Overall I thought I served pretty well, so there wasn’t, like, a lot of points on serve where she could really dictate off the first shot. If I could get a good strike, I was in good shape to win those points. I think I was able to attack her second serve pretty well.”