You are here: Home / Features / Next Stop Atlanta for the US Open Series

(July 30, 2016) ATLANTA, Georgia – The BB&T Atlanta Open began with qualifying on Saturday. The BB&T is a ATP World 250 tour event held in downtown Atlanta at Atlantic Station with a 28 player main singles draw and a 16 team draw. It is the the third event in the nine tournament series leading to the U.S. Open. This year marks the thirteenth year of the series. The Atlanta stop will also be the last ATP tour event prior to the Olympic games. On a side note, 2016 is the anniversary of the Atlanta Olympic games in which Andre Agassi won gold. The tournament is helping the city celebrate with an Olympic exhibit in Atlantic Station with a variety of athletes from those games stopping in. Andre Agassi was to play an exhibition against his opponent from those Olympics, Sergi Bruguera, but had to withdraw from future tennis events for the foreseeable future due to recurring back problems. John McEnroe will replace him for the exhibition Sunday evening. John Isner returns as a three-time champion, but faces a strong field headlined by eighteenth ranked Nick Kyrgios in his quest to capture a fourth consecutive title. 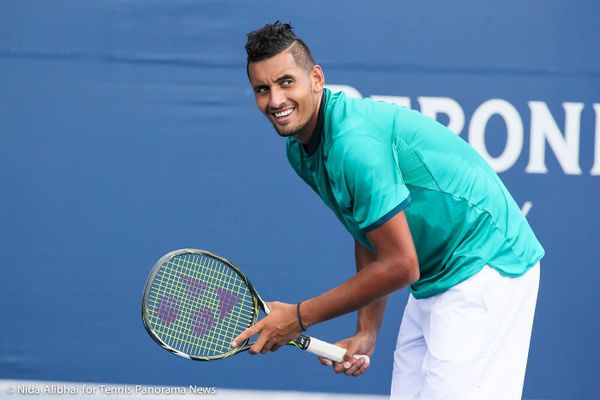 Kyrgios caused a bit of stir as he checked into the tournament hotel on Saturday, chatting with local players and posing for selfies upon request. It will be interesting to see how the crowd reacts to him as could face American Jared Donaldson or fellow Australian Sam Groth, always a fan favorite in Atlanta in his opening match. He will not see former Georgia Bulldog and top ranked American John Isner unless both men make the final. Another Bulldog, Austin Smith, received the annual “college wildcard”, though will face 63rd ranked Taylor Fritz, an eighteen year old American in the opening round of the main draw.

The qualifying tournament has seven American men vying for two slots in the main draw. Their numbers were cut to three at the end of Saturday’s action. Nicholas Meister, Austin Krajicek, and Christopher Eubanks were the only to survive. Eubanks took the hard way in, winning a local “Atlanta Challenge” tournament to earn his place in qualifying. Clearly, it was well earned, with Eubanks playing very well in today’s action. 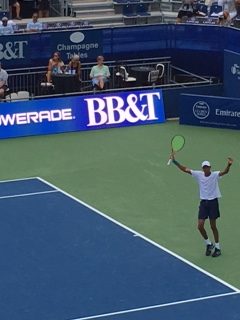 Eubanks played fellow American . Paul was the 2015 Roland Garros junior champion and was the lone American to make it through qualifying at the 2015 U.S. Open. Eubanks’ experience as a college player at Georgia Tech seemed to help him with the momentum swings that were part of the match. He put pressure on Paul’s serve early and often, forcing long service games. Paul didn’t help his cause, at one point on getting in only 41% of his first serves. Eubanks got the early break in the first set and ran away with the set at 6-2. Paul made some adjustments early in the second set, moving back for Eubanks’ second serve to better get the ball in his strike zone. Eubanks obliged by letting his own first service percentage drop a little, giving Paul the opportunities he needed.

Eubanks “just kind of stuck with it until I got that break back from down 4-1 to give me a little more juice. Then I got a quick hold to consolidate the break, something we always talk about.” “At that point I just said I’ve been breaking him all day, let’s get another one.” Once that match got even, it was mostly a matter of quick holds until Eubanks held to go up 6-5. Paul put up some resistance, bringing his service game to deuce before finally sending one long giving Eubanks the 6-2, 7-5 win. He will take on 104th ranked Thiago Moneiro of Brazil in the next round of qualifying on Sunday at 11 AM.

Nine Americans are already part of the main draw. Play will continue all week, wrapping up with Sunday singles and doubles finals.