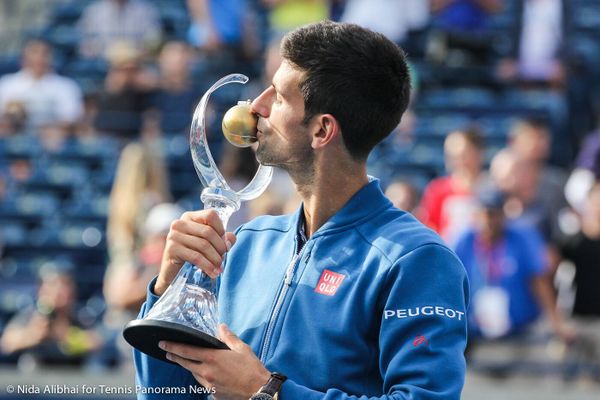 (July 31, 2016) Novak Djokovic won his fourth Rogers Cup title on Sunday in Toronto beating Japan’s Kei Nishikori 6-3, 7-5. For the Serb, the world’s top player it’s his 30th Masters Series title on the ATP World Tour, adding to his Masters title record. In the event which rotates between Toronto and Montreal, Djokovic also won titles in 2007, 2011 and 2012.

Djokovic, who has nine straight wins against Nishikori, is now 33-1 on hard courts for the year.

“I think he stepped it up,” said Nishikori. “He raise his level I think a lot from these couple days, couple days ago.

“He played really deep, and he didn’t give me any, like, free points. Especially he was serving really well, so I didn’t have many, you know, chance for my return game. So I was really feeling the pressure every game.

“Maybe second set maybe I had some chance, but there was too many unforced errors from me. Well, also he was playing good, but I couldn’t play good tennis today.”

“I think, like I said, I had too many unforced errors especially during important points. Yeah, he was returning really well today, I think. I was hitting some good first serves, but he was making return in deep.

“I hope I can step it up a little more and winning some titles, but I think still Novak is biggest challenge for me to win against him. Especially on hard court he’s been beating me. You know, not easy but two sets. Miami, here, especially big match like here in final.

“So I think I need more experience, you know, of these kind of matches, but I think this is a great week even though I lost Novak. It was second time this year in the final, Masters. I think getting closer and closer. So hope I can get a Masters title as soon as possible.

“I think that’s going to give me a lot of confidence for winning the Grand Slams and those big tournaments.

This is Djokovic’s seventh title of the year which includes victories at two majors – the Australian Open and the French Open with Masters titles at Indian Wells, Miami, Madrid and Toronto, as well as a tournament in Doha.

Djokovic, whose next stop is Rio de Janiero for the Olympic Games was asked about his participation and if he has concerns about playing there.

“No, no. Really, again, I think it’s all in our minds,” he said about people having reservations about playing in Rio. “Depends how you really approach things. I really don’t think about negative stuff and stuff that might cause a fear or concern or something like that, like viruses or security issues.

“Surely they are there. We have to be, in a way, cautious. But I try to look at things from the brighter side. I’m part of the Olympic Games. You know, it’s a very exciting city and country that is very passionate for sports. You know, millions of people will be there. You know, so many other millions will watch it on the TV. That’s the kind of vibe that I feed on, and I look forward to the Olympic Games because I approach it in that way. So I can’t wait to be there.”

Asked about the importance of winning a gold medal to his legacy he commented:

“Well, there is going to be a lot going on with the Olympic Games, and as you mentioned, different sports and different events.

“Well, it’s the biggest sports event in the history of the sport, so to be part of it is already a huge privilege and honor that I will cherish, as I did in Beijing and London Olympic Games.

“I had an honor of carrying the flag for my country in London back in 2012, and that was one of the most unique and unforgettable moments of my life. So I look forward to that, honestly, just being part of it.

“Approaching the Olympic Games as any other tournament, really. Trying to respect the same kind of preparation and routine that I have with my team and that I have respected for so many years, and that has worked well for us this week and as most of the other weeks the last couple of years.

“So of course the overall sensation is not going to be the same as the other tournaments, because it’s Olympic Games. You know, of course you represent your country. You know, you get to feel that you’re part of something much larger than just the tennis event. I look forward to that. I’m going to try to extract that positivity out of that huge attention and energy that will be directed into the Olympic Games and hopefully put myself in a position to battle for a medal.”

“After Grand Slams, these are the biggest events we have in sport of tennis,” Djokovic continued. “Naturally I’m going to be very disciplined, committed, and focused to do well.

“But, you know, obviously Grand Slams you value those, you know, the most because in the history books they count the most. But in the other hand, you know, I love playing in Masters tournaments throughout my career. I have had plenty of success in this particular category of events, and I’m very grateful for that because I always value them as much as I value Grand Slams.

“So, you know, I try to approach every single day, whether it’s a match day or practice day, with the right mindset and knowing that this will eventually pay off down the road.”

Djokovic captured the bronze medal at the 2008 Olympic games.