You are here: Home / Features / Del Potro Ousts Top Seed Djokovic in First Round of the Olympic Games 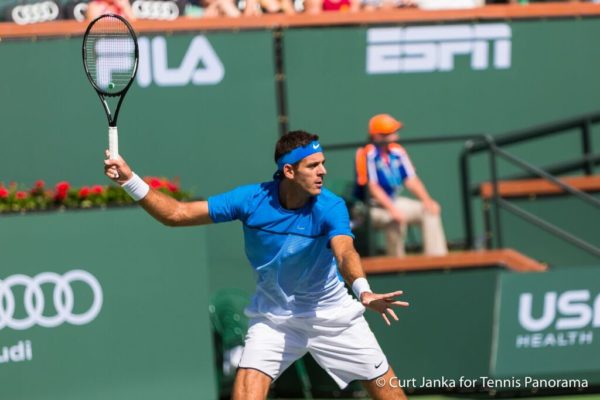 Del Potro has been sidelined by wrist surgeries on and off, over the past few years is ranked 145th in the world. The big forehand which saw him win the 2009 U.S. Open returned to its former glory in beating Djokovic who was trying to complete a career “golden slam” by winning a gold medal at the Olympics. The Argentina crushed 41 total winners, 29 coming on his forehand side. His Serbian opponent, the 12-time major champion his more errors than winners 32 to 26.

Del Potro’s day started out with him being stuck in an elevator in the Olympic Village before Argentine handball players got him out.

It was a 50-50 day for defending women’s Olympic champion Serena Williams. The 34-year-old world No. 1 and holder of 22 majors titles won her opening singles match under gusty winds 6-4, 6-2 victory over Australia’s Daria Gavrilova.

Later in the day, Serena teamed up with sister Venus for their first round of doubles in Rio. The three-time doubles gold medalists and top seeds lost an Olympic doubles match for the first time ever, falling to the Czech Republic’s Lucie Safarova and Barbora Strycova 6-3, 6-4.

Serena said that she and her sister “played terrible.”

Safarova was originally supposed to be playing with Karolina Pliskova, who withdrew.

Another pair of siblings also fell in their first round of Olympic doubles, as Andy and Jamie Murray lost to Brazil’s Thomaz Bellucci and Andre Sa 7-6 (6), 7-6 (14). Andy Murray won his first round singles match over Viktor Troicki 6-3, 6-2.

Rafael Nadal returned to the court for the first time since the French Open with a 6-2, 6-1 win over Argentina’s Federico Delbonis. Nadal, Spain’s flagbearer in the opening ceremony of the games, is coming off a left wrist injury. Nadal won the gold medal at the 2008 Beijing Olympics, but missed the 2012 London Olympics.