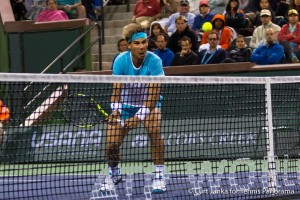 (August 23, 2016) From Tennis Australia – Fourteen-time major champion Rafael Nadal (ESP) will commence his season in Australia for the first time when he joins the field at Brisbane International presented by Suncorp this summer.

The Spanish ace has traditionally favored the Middle East to start his new year campaign, but will break with tradition in January for his maiden appearance in the Sunshine State.

“It’s going to be the first time in my career that I’m going to play in Australia the first week of the season and I’m really excited about it,” Nadal said.

“I think this is something I have to do during my career and I think at the same time it’s going to be a great preparation to be in Australia early. Everybody who has been in Brisbane has told me very beautiful things about the tournament and the place so I want to try it.”

Nadal completes a clean sweep of the ‘Big Four’ to step out at Pat Rafter Arena, with fellow men’s tennis stars Roger Federer (SUI), Novak Djokovic (SRB) and Andy Murray (GBR) all having competed at previous editions of the event.

Earlier this month Nadal teamed with compatriot Marc Lopez to win gold in the men’s doubles at the Rio Olympics and narrowly missed a medal in the men’s singles event, capping a remarkable return to form.

Brisbane International Tournament Director Geoff Quinlan said the world No.5 would be a sure-fire favourite with fans this summer.

“We’re thrilled to announce Rafael Nadal will start his season in Brisbane in 2017 and can’t wait to welcome him to Queensland Tennis Centre,” he said.

“The Brisbane International has a reputation for attracting the biggest names in world tennis and we’re really excited our fans will have the chance to see Rafa in action this summer. We’ve been in talks with Rafa for a number of years about competing in Brisbane, he’s seen the event get bigger and better every year and we’re ecstatic he’s decided to join the field in 2017.

“Rafa is a legend of the sport and one of the most exciting players to see live so I’m sure fans will be counting down the days to January.

“This is just the start of a very exciting line-up of players we will announce over the coming months as we look ahead to Brisbane International 2017.”

Minister for Tourism and Major Events Kate Jones said securing Nadal was a win for the tournament and Queensland tourism.

“In 2016 we welcomed legend Roger Federer for a third time, and it’s fantastic to now add Rafa to the list of champions to play in Queensland’s premier tennis tournament,” Minister Jones said.

“Securing marquee players like Rafael Nadal provides a big drawcard for the Brisbane International and boosts the reputation of this world class Queensland event.”