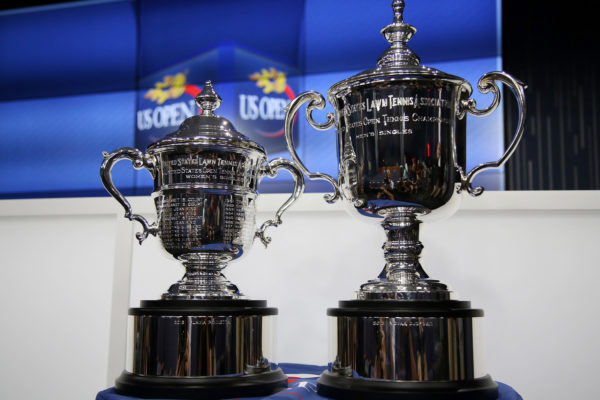 August 26, 2016 – Photos from the US Open Draw Ceremony during the 2016 US Open at the USTA Billie Jean King National Tennis Center in Flushing, NY. Michael LeBrecht/USTA

(August 26, 2016) FLUSHING MEADOWS, New York – The two top seeds at the 2016 U.S. Open enter the tournament coming back from injuries. The world No. 1 man, Novak Djokovic said that he’s “getting there” in terms of his wrist injury.

The 12-time major champion talked about how his injury came about: “It happened actually in Rio, just few days before the start of the tournament,” said the Serb. I did experience this for the first time in my career. Never had this particular wrist injury before. I played against (Juan Martin) Del Potro, who unfortunately was absent from the tour for the wrist injury himself.

“You know, it was interesting for me to experience how was it and how it is for him for so many years struggling with that essential part of your body as a tennis player.

“Yeah, after undergoing certain treatments I’ve gotten better. I’m just hoping that Monday when the tournament starts I’ll be able to, as I said, get as close to the maximum of executing my backhand shot as possible.”

Twenty-two-time major winner and No. 1 Serena Williams had been dealing with a shoulder injury. “I have not played a lot, I haven’t practiced a lot, but I’m just now starting to feel a little better, she said.

“I’m really fit right now,” Williams continued. “I mean, I think I did serve pretty well at Wimbledon this year. I felt like I was able to hit aces when I wanted to. So, yeah, couple months ago, couple — few weeks ago.”

Both top players will face challenges in the very first round. Williams will be facing Russia’s Ekaterina Makarova, who upset Williams in the round of 16 at the 2012 Australian Open.

Commenting on her opponent she said, “she’s a big fighter. She never really stops.

“I think one thing I think that’s pretty impressive is she’s pretty — she gets a lot of balls back. You think she’s not super quick, but she is.”

Could potentially meet her sister Venus in the semifinals.

Djokovic will face off against a former Wimbledon semifinalist, once ranked 14th in the world, Poland’s Jerzy Janowicz.

Two-time U.S. Open winner and 14-time major title holder Rafael Nadal could face Djokovic in the semifinals, is also coming off a wrist injury. Nadal won the gold medal in doubles at the Rio Olympics.

“I am a little bit better,” talking about the wrist injury. “It’s obvious that when you have been outside two months and a half you need a little bit of time.

“During the wrist injury always you try to find movements to avoid the pain. So I think today I can start the forehand, I think my normal forehand, but still needs time to feel that I am more confident on my wrist.

“But I am practicing well and I am competing well, I think.”

The fourth seed Nadal will open his quest for another title in Flushing Meadows against Denis Istomin.

No. 2 Andy Murray and No. 3 seed Stan Wawrinka are on the other side of the draw.

A potential dangerous floater in silver medalist and 2009 U.S. Open champion Juan Martin del Potro who sits on Murray’s side of the draw in Stan Wawrinka’s quarter.

The No. 2 seed in the women’s draw is Angelique Kerber who missed a chance to become No. 1 in the world when she lost the final of Cincinnati. The German also lost in the gold medal final of the Olympics to Monica Puig.

Asked about her confidence after these two tough losses she said: “Actually, to be honest, I’m feeling good, because I have great matches in the last weeks, and especially a lot of positive emotions. I mean, of course I have two tough matches in the finals, but I played not bad. I mean, my opponent is playing good in these matches.

“But I have a lot of confidence to being here again, having a lot of time now for practicing and preparing for the last Grand Slam of the year.”

Karen Pestaina for Tennis Panorama at the U. S. Open.