You are here: Home / Features / USTA Pro Circuit Challenge Winner Ernesto Escobedo Wins First Round Match at US Open for First Match Win at a Major 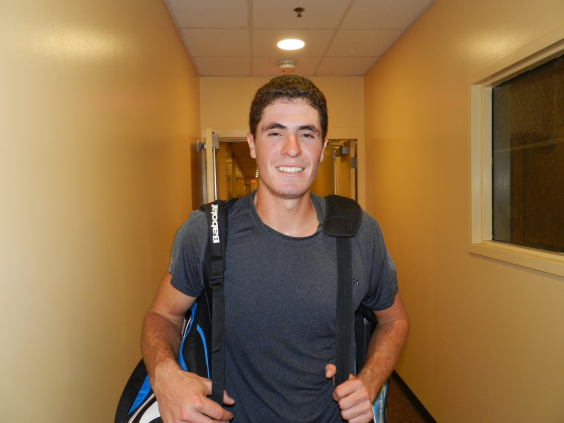 (August 29, 2016) FLUSHING MEADOWS, NY – U.S. Open Wild Card Ernesto Escobedo won his first match at a major when 99th-ranked Lukas Lacko retired after the fourth set tied at 4-6, 6-4, 6-4, 3-6 in the first round of the U.S. Open on Monday on Court 7. Not only is it this the American’s first win at a major, but it’s just his second win on the main tour. His first came at the pre-Wimbledon ATP World Tour event in Nottingham when he won his first round match there.

The 20-year-old Californian gained entry into the U.S. Open by compiling the largest number of points in the USTA Pro Circuit Challenge which consisted of competing in three Challenger events during the summer.

“The atmosphere was great, I brought my whole family, that helped me so much today to come back in the fourth set. They pushed me a lot. My grandpa is here, my dad, sister and friends.”

“I won the challenger pro circuit challenge,” he said. “They counted three challengers. I only played two of them, so leading into the first challenger I played, I didn’t even think about it (US Open wild card). To be honest I didn’t care for the wild card. But once I won that tournament (Lexington, KY Challenger). I said wow, I’m really close to it.”

“That was my first pro title win. I didn’t even win a Future, that was the first pro title in my life.”
“I beat Frances Tiafoe in the final It was a really tough match,” he continued. “He’s a great competitor. I just stuck with it and believed in myself. In the end I just came out on top.”

Escobedo first picked up a racquet at four-years-old. “I just thought it was a good sport for me,” he said. Escobedo’s father played pro tennis for two years, but said that it wasn’t for him.

Escobedo who turned pro two summers ago, confessed that 2003 U.S. Open champion Andy Roddick was a role model for him.

“When he won the U.S. Open that just turned me up. Once I saw him win it, I told myself I want to be just like him.”

Escobedo talked about fulfilling his goal for this year: “In January I started the year at like 400 in the world, so I told myself that in December, I just want to be top 200 and now I reached that goal today. So I’m pretty happy about that.”

The West Covina, California native came into Flushing Meadows ranked at No. 201 in the world.

What advice does the wild card have for kids who want to pursue a pro tennis career?

“First of all they have to be really patient,” he said. “This is a really tough sport. It could be one of the toughest sports out there. Be patient.In the juniors don’t be so hard on yourself if you lose ’cause to be honest I didn’t do juniors.Have fun out there, develop your game.”

He’ll take on Kyle Edmund in the second round. The British man upset No. 13 seed Richard Gasquet in straight sets.
“I played him two summers ago, he beat me in three sets so I’m up for a challenge,” said Escobedo.