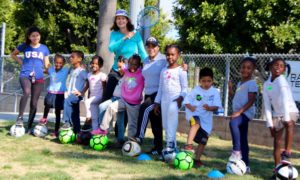 (AUGUST 30, 2016) NEW YORK – With the 2016 US Open Tennis Championships hitting the courts this week in Flushing, new mobile application platform VDROP (http://vdrop.com/) has teamed-up with the First Break Academy (First Break) (http://www.first1break.com/) and top American US Open tennis stars to put on an entertaining crowdfunding campaign that will benefit the award-winning grassroots outreach program headquartered in Los Angeles.

Participating in the series of high-profile video challenges taking place on VDROP are Greatest Doubles Team of All-Time Bob and Mike Bryan, #1 American ATP World Tour Singles Player Stevie Johnson and top American WTA stars Christina McHale and Nicole Gibbs. Through VDROP’s new mobile application platform, tennis fans can engage with the entertaining video content between the players and then crowdfund each challenge they want to see completed in order to raise money for First Break.

“From the outset, we have been driven to create a more intimate experience for fans and their heroes,” said Mark John, Founder of VDROP.  “This partnership with First Break is so exciting for us as we get to create connections with some of the world’s great tennis players and their fans whilst serving those in need.”

With a mission to empower kids and positively impact their futures by championing access to excellent tennis programs featuring multi-sport play activities and academic enrichment, 100% of the proceeds from the VDROP campaign will go to First Break.

“We set out to get to know the kids going to school in the neighborhood surrounding our facility at StubHub Center because we’d like to introduce new families to the game that has given us so much,” said Marc Lucero, First Break’s Fundraising Chair and Tennis Development Advisor, and WTA Tour Coach. “Tennis is transformative; no doubt, the game has offered me a lot personally. All of us at First Break are intent on sharing this opportunity. It’s only natural to want to do all we can for the kids who are now cheering when they see the nets on campus.”

The RAMP tennis outreach initiative that has evolved into First Break grew out of the belief that an early break can have a lifetime of meaning, and sports provide a universal platform that breaks through barriers and invaluable life skills like teamwork, leadership, and integrity. In the spirit of asking, “What else?” First Break is working to sustain the momentum started by RAMP outreach so more children can experience the lifelong benefits of tennis. The programs offered by First Break Academy reflect the community they serve and are designed in collaboration with experienced educators and tennis development coaches.

“The Rio Games opened the eyes of sports fans around the world to so many great things. Countless Olympians reaped the benefits of playing multiple sports as children; sports like basketball and soccer develop skills that translate to tennis and vice versa,” added Pam Shriver of the First Break Advisory Board. “By providing urban youth access to tennis in a multisport environment, we give tennis the opportunity to sell itself and know that kids will fall in love with our great game.”

In the last few years, First Break has had over 400 urban children introduced to tennis through monthly RAMP Tennis Outreach PE classes taught by volunteer coaches, parents, junior players, and friends of the game. The grassroots effort led to more than 600 hours of donated tennis instruction on the playground, 60 local first to seventh grade kids from two schools have participated in First Break MultiSport tennis and education programs at the RAMP courts at StubHub Center, home of the United States Tennis Association (USTA) Player Development-West and the LA Galaxy. The emphasis on multisport activities is based on a belief that the social, physical and mental benefits of participating in a diversity of sports is more advantageous to the choice of early single sports specialization for young athletes.

A revolutionary platform changing the way a growing community of celebrities, athletes and artists interact with their fans, VDROP is giving fans the ability to send them a personal, one-on-one video request of anything they want to see them to do along with a financial offer for it.  VDROP is the first mobile application solution to monetize the social media relationship between celebrities, professional athletes and their fans in a fun, meaningful and emotional way. Currently, top ten ATP World Tour Singles Player Tomas Berdych serves as VDROP’s sports ambassador and was an early adopter of the platform.

For more information on VDROP, visit www.vdrop.com or download the mobile app VDROP to view the campaign challenges and crowdfund them to support First Break.