You are here: Home / Features / Despite First Round US Open Loss, “Good Learning Experience” For Kalamazoo Winner Michael Mmoh 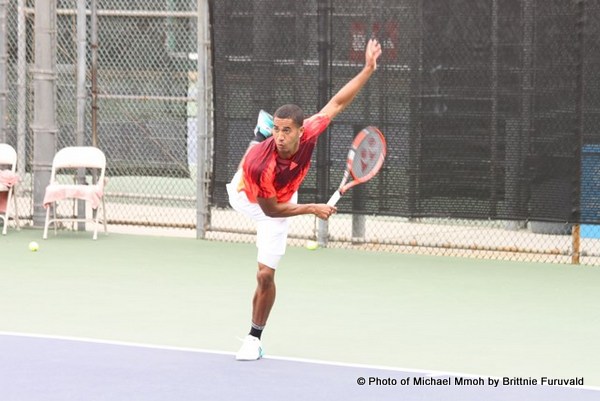 The 2016 USTA Boys champion, Mmoh who took up the sport at age three, had a father Tony Mmoh who played on the ATP World Tour and was ranked as high as 105. His father also represented Nigeria in Davis Cup.

He admitted to winning sets from his father as a young teenager, which he said gave him confidence.

Mmoh rains with Bollettieri Tennis at the IMG Academy in Bradenton, FL. He turned pro in 2015.

Tennis Panorama News had a chance to ask the 18-year-old American a few questions after the match:

Tennis Panorama News: Can you talk about how you felt you competed today?

Michael Mmoh: I think I competed well first set I was down a break, came back, had chances to extend the set. I just wasn’t serving as well as I’d like and second set, same thing. Broke back. And the third set I just thought he was wailing away on the shots. It didn’t really matter for him if he missed it. Luckily for him that most of them went in. it was just tough.

TPN: What has been the biggest challenge to you transitioning from juniors to challengers to main tour tournaments?

MM: Especially when you’re playing a guy like today, he just kind of overpowered me and sometimes that shouldn’t be the case. Even though he hits the ball big, I’m also a big guy and I should be able to compete with that and do a better job. Like when he’s really going after his shots, like he was today. Just transitioning to play more aggressive tennis.

TPN: Is it true that your parents named you after Michael Jordan?

TPN: Did you have any inkling to play basketball?

MM: When I was younger, I kind of liked basketball, I kind of wanted to play it but it was a short phase.

TPN: Other than you Dad, do you have any idols or role models? In tennis or overall?

MM: I would say I like Michael Jordan obviously as a role model. In tennis, I would say, I’ve always loved Andy Roddick and current generation of players, I really respect Djokovic. He’s a good role model – the way he’s so dominant. It’s very impressive.