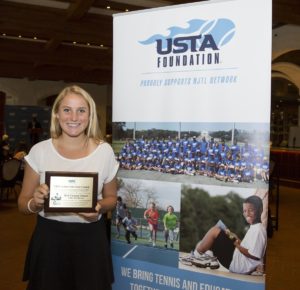 WHITE PLAINS, N.Y., Aug. 31, 2016 – USTA Foundation, the national charitable organization of the United States Tennis Association (USTA), honored the 10 winners of the 18th annual NJTL Arthur Ashe Essay Contest on Sunday, Aug. 28 at the Yale Club in New York City. The winners, ranging in ages from 10 to 18, were selected out of more than 2,800 entries submitted this summer.

Henderson graduated from the West Career and Technical Academy High School in 2016, where she was valedictorian. She is a four time state doubles champion and is attending Williams College in the fall where she will be majoring in biology and playing on the tennis team. She is a part of the Marty Hennessy Inspiring Children Foundation.

This year’s essay contest focused on tennis legend and pioneer Althea Gibson and her ability to show unwavering strength and courage in the face of adversity. That enabled her to become a trailblazer in the tennis world as the first African-American Grand Slam and U.S. Championships winner.

To enter the contest, students were asked to write an essay of 350 words or less. This year’s question asked: “How have your skills in tennis impacted the development of your character and how you address your personal challenges on and off the court?”

Each winner received round-trip airfare to New York City for herself and a parent or legal guardian plus a two-night stay at the Grand Hyatt 42nd Street and VIP status in the President’s Box during the 2016 Arthur Ashe Kids’ Day presented by Hess. Arthur Ashe Kids’ Day was held Saturday, Aug. 27, at the USTA Billie Jean King National Tennis Center.

The weekend wrapped up with an awards luncheon on Sunday, Aug. 28, hosted by USTA Foundation chairman and former world No. 4 James Blake and former New York City Mayor and USTA board member David Dinkins. The luncheon will be held at the Yale Club, where the essay contest winners received an honorary plaque.

“This year’s Arthur Ashe Essay contest winners consist of a talented group of students from some of our most outstanding NJTL programs,” said Dan Faber, USTA Foundation executive director. “We expanded the focus of our essay question and challenged the students to reflect on the great achievements of Althea Gibson. This year’s responses were some of the most phenomenal ones we’ve read as they truly highlighted their individual experiences and personal strengths as a result of the positive impact tennis has had on their lives. We are proud of their hard work.”

In January 2014, the USTA Foundation combined with USTA NJTL, a national network of 500 community-based tennis and education programs serving more than 225,000 youth, to become a fully operational foundation. NJTL has impacted millions of kids throughout the country over the past 47years, making it the largest grass-roots tennis program in the United States.