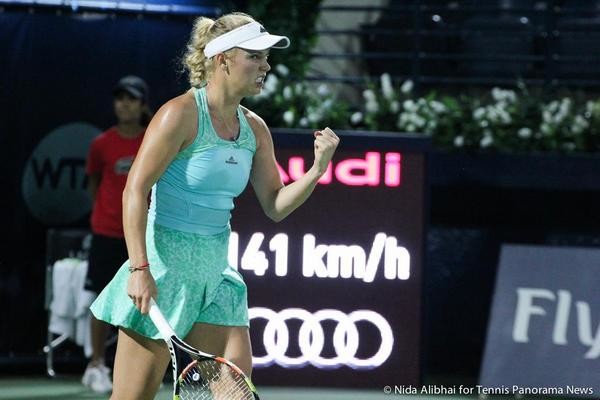 (September 4, 2016) FLUSHING MEADOWS, NY – Caroline Wozniacki took down No. 8 seed Madison Keys 6-3, 6-4 to reach her first quarterfinals of a major, since she reached the US Open final where she lost to Serena Williams in 2014. The Dane once ranked No. 1, has fallen on hard times coming back from an injury, seeing her ranking fall to No. 74 entering the US Open.

“This is crazy,” two-time US Open finalist Wozniacki said on court after the match. “After such a tough year to be here and into the quarterfinals is amazing.”

The 21-year-old American Keys hit 33 unforced errors and her serve was broken three times. Wozniacki won nine of ten of her service games. 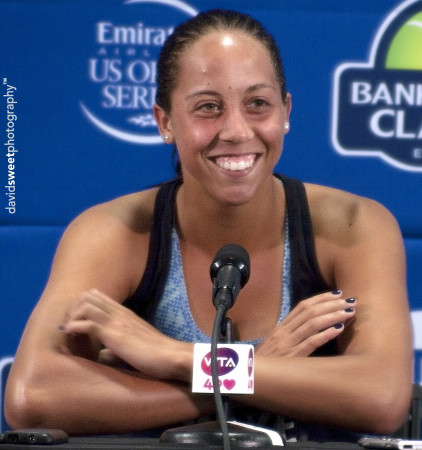 Keys talked about the loss in her news conference: “I think it was nerves a little bit. I definitely felt like I got off to a bad start, and then I felt like I was trying to catch up from there.

“I feel like the match just got away from me.”

“It’s been a good week,” said the 26-year-old veteran Wozniacki. “I’m really happy about the way I played. Obviously Madison is a strong player. She hits the ball really hard.

“But I managed to really, you know, play well, get a lot of returns in. I served well, which I was pleased with.

“Yeah, I’m just happy that I got another win.”

She’ll play Anastasija Sevastova for a spot in the semifinals.

Wozniacki talked about her next opponent: “I had some tough matches against her in the past. I think we played Fed Cup a couple of times, but also we played the Australian Open.

“She’s a tough player. She’s a tough opponent. She has a lot of grit and good hands. It’s not going to be an easy one, but I’m excited just to have another shot.”

Anastasija Sevastova became the first Latvian woman to make a major quarterfinal since Larisa Savchenko at 1994 Wimbledon when she knocked out 13th seed Johanna Konta 6-4, 7-5 in the opening match on Arthur Ashe Stadium.

For the 48th-ranked Sevastova, it’s just her sixth win over Top 20 opponents. She retired from the sport due to back injuries in 2013, but came back to the tour last year.

“I still cannot believe it,” Sevestova expresasing her feelings about reaching the final eight after coming out of retirement last year. “Mentally I’m spent. Totally spent. But it’s amazing.”

“And, yeah, I think this was a quality match today. 30 winners, 26 unforced errors. I mean, it’s a good quality, I think. We played okay.”

Advancing to the semifinals will push her ranking up into the top 35. 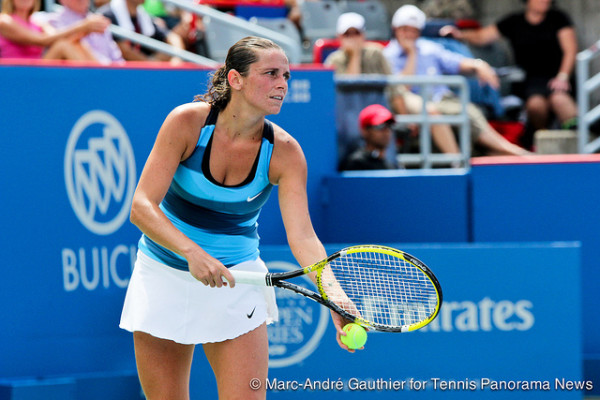 Seventh seed Roberta Vinci of Italy has reached the US Open quarterfinals again, defeating No. 99 Lesia Tsurenko of the Ukraine 7-6(5), 6-2.

The Italian admitted that she’s playing with an injury:”I have some problem with my tendon, left leg. That’s it. A little bit pain on my back. A lot of pain, but I don’t want to think about this injury.”

“I fight a lot, and important thing was to try something and stay positive, stay focused for the match.”

The Italian stopped Serena Williams’ bid for a Grand Slam last year, when she upset the world No. 1 in the semifinals of the US Open. This is the Italian’s 14th main draw appearance in Flushing Meadows.