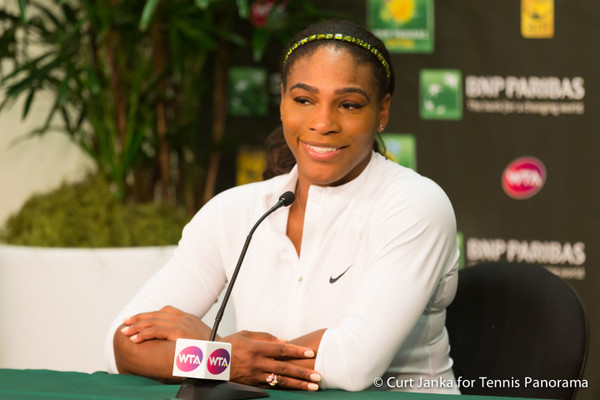 (September 5, 2016) FLUSHING MEADOWS, NY- Serena Williams set a record in number of match wins at a major at 308, while her sister Venus missed out on converting a match point on Monday at the US Open.

No. 1 Serena Williams seeking her 23rd major, beat Yaroslava Shvedova 6-2, 6-3 to reach the quarterfinals of the US Open. Her win pushed her past Roger Federer in total match wins in the majors.

“It’s a huge number,” said the 34-year-old Serena. “I think it’s very significant actually. I think it’s something that, you know, just really talks about the length of my career, in particular. I’ve been playing for a really long time, but also, you know, given that consistency up there. That’s something that I’m really proud of.”

Serena will play fifth seed Simona Halep in the quarterfinals. “I just think with everyone I play, they play a step up and above their ranking,” Serena commented. “I think that’s the beauty, one of the reasons I’m able to hang. Everyone I’m playing is playing like they’re No. 1.

“To me it doesn’t really matter who I play because I have to expect they’re going to play the match of their life. That’s how I go into these matches now.”

Karolina Pliskova reached her first quarterfinal at a major when she saved a match point in the third set and rallied to beat two-time US Open winner and sixth seed Venus Williams 4-6, 6-4, 7-6(3) on Monday at Flushing Meadows.

For 10th seed, from the Czech Republic, this marked the first time she defeated the seven-time major winner and former No. 1.

Asked to talk about the match during her news conference, 35-year-old veteran Venus said: “Yeah, it was just a lot of errors. I still have to cut back on my errors.

“I think she started returning serve really well as the match progressed. She lifted her game. Definitely a lot of credit to her for hanging in there and staying positive.

Venus had a match point at 5-4 in the third set, with Pliskova serving at 30-40 “and she managed to stay alive,” Venus said.

“We both competed really well. Of course I’d like to come out on top of that match. Just kept fighting till the end, but I don’t know, she had a little more luck today.

“I had a few too many errors in the tiebreaker.”

“I think in the breaker I went for a little bit more but I didn’t put the ball in enough. You know, I went for some aggressive shots; didn’t necessarily put them in.

“You know, obviously she played well.”

The 10th seeded Pliskova has reached her first major quarterfinal at 24.

“To win matches like this, it takes some time,” Pliskova said. “You need to have experience definitely on the big stages, on the big tournaments.

“I played against her, played good match against her in Zhuhai. Was also close, but I wouldn’t say it was like here. I was fighting with more things here, especially with the people as well. So it was more difficult.

“Yeah, with years, with experience, I’m feeling better on these stages and against top players.”

She was playing pretty good tennis, serving very well,” said Radwanska. “I just couldn’t do any more I guess today. I was really trying. I was just too slow today.”

In the first match of the day on Arthur Ashe Stadium, 2009 US Open champion Juan Martin del Potro became the lowest-ranked man to reach the US Open quarterfinals since 1991 when his opponent eighth seed Dominic Thiem retired with a knee injury with the Argentine leading 6-3, 3-2.

”I couldn’t bend it too much the last three days,” Thiem said. ”So I was all the time a little bit handicapped.”

”I never expected to play that many matches, of course, this year,” he said. ”For sure next year I’m going to change it up a little bit.”

Del Potro will be facing Stan Wawrinka. ”He will be the favorite to win in that match,” del Potro said. ”But anything can happen in this event for me. I got the power from the crowd in every match.”

Nishikori will face No. 2 seed Andy Murray for a spot in the semifinals. Murray destroyed Grigor Dimitrov 6-1, 6-2, 6-2 to open the evening session.

“I played very well. Tactically I played a very good match,” Murray said. “I don’t think I made any mistakes there. I kept good concentration throughout.

“Yeah, I mean, it was a really good match. I think Grigor played his best, but I didn’t really give him a chance to get into the match.”