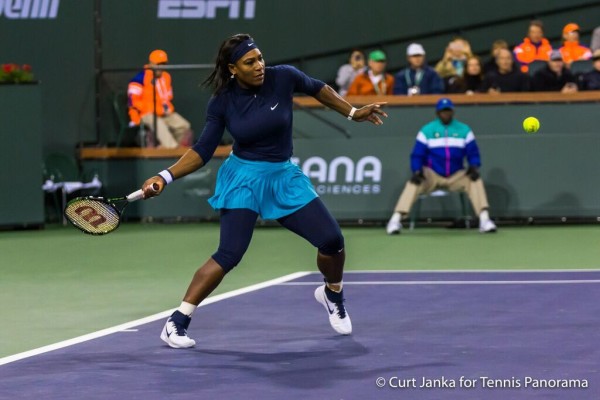 (September 8, 2016) FLUSHING MEADOWS, NY – Serena Williams had to hold off a game Simona Halep to reach another major semifinal on Wednesday night, while No. 3 seed Stan Wawrinka ended the run of 2009 US Open Juan Martin Del Potro.

No. 1 Serena Williams beat fifth seed Halep 6-2, 4-6, 6-3 in her quarterfinal, and will play Karolina Pliskova next for a place in the final.

“I feel great,” said Williams. “I’m glad I got tested. The best part of it is I feel like — I mean, I think her level really picked up in the second, but I had some opportunities that I didn’t take.

“So what I gather from that is I really could have played better in that second set and maybe had an opportunity to win in straights.

“I think if anything, that’s the biggest silver lining I take.”

Williams had 18 aces and 50 winners and made a big effort to come to net to end points.

“I have been working on getting to the net,” she said. “Particularly today I couldn’t do too much off the groundstrokes. I felt maybe I should get in more. It worked for me.

“I think it was a good match, Halep said. “I played well. I could play better in those moments when I had chances. But I think the level was pretty high.

“I’m okay with the way that I was fighting till the end. It’s something normal now for me, so it’s a good thing. She played really well. She is the best player, so her serve was huge today.

“It was tough. Is tough. I’m a little bit sad, but I have just to take the positives, because I have a lot going ahead.”

Wawrinka beat Del Potro 7-6 (5), 4-6, 6-3, 6-2. He will face sixth-seeded Kei Nishikori on Friday for a chance at the final.  Wawrinka saved a match point against Dan Evans in the third round.

Del Potro, coming into the US Open ranked 142, due to being sideline with wrist injuries, is coming off winning the silver medal the Rio Olympics. Del Potro beat both Novak Djokovic and Rafael Nadal on the way to the gold medal round.

“I think my tennis is starting to respond as I want, but physically I’m still down,” said the Argentina. “You know, I’m not in the same level that these guys. I need to just to stay healthy and wait for the preseason to get 100% for next year.

“And everything here is positive for me. I’m so glad for that.”

“Well, I’m starting to play tennis again after a long, long time,” he continued. “Like two months ago I was losing first round, second round, 80 players or different rankings.

“And now I’m fighting at the same level as the top guys, and I already beat Djokovic, Rafa. I played against Murray in a great match. Wawrinka is the No. 3 player in the world and I’m there. That’s means something good to me.

“But I need to keep working. I need to get my physical back as soon I can, and then I will have a chance to play in the same conditions.”