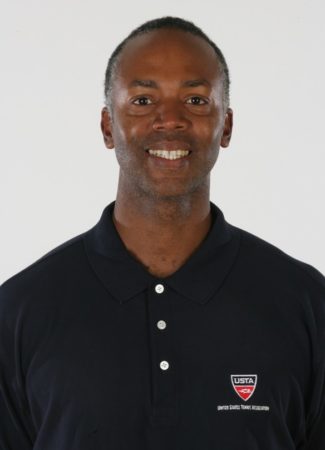 (September 9, 2016) FLUSHING MEADOWS, NY – Tennis Panorama News sat down with the General Manager of Player Development at the United States Tennis Association, Martin Blackman, to ask a few questions about his goals for Player Development.

Karen Pestaina for Tennis Panorama News (TPN): I’d like to know how became involved in tennis in the first place?

Martin Blackman (MB): I was born in New York, while my dad was going to Columbia University. When I was two-years-old, we moved to Barbados, that’s where my father’s from and I had two older twin brothers who played tennis. They were very good players. So they basically coached me, when I was a kid in Barbados from 2-13.

When I was eleven, we started coming over to New York for the summers and I was fortunate enough to get a scholarship to the Port Washington Tennis Academy. So I trained at Port in the summers, when I was 11 and 12, I was still living in Barbados.

When I was 12-years-old, I lost in the finals of the Orange Bowl and Nick Bollettieri offered me a scholarship to his academy. So I went to high school at the Bollettieri Tennis Academy from 13-17. And then I played at Stanford for two years – two NCAA championship teams. Had the pleasure of playing doubles with Patrick (McEnroe) my freshman year so we became great friends and then I played on the (ATP World) tour for six years.

Coming off the tour I finished my degree at GW (George Washington University). I thought I wanted to get out of tennis, but a head coaching position opened at American University, and was able to get tuition remission. I was doing graduate work so I took that job as head coach and I fell in love with coaching.

I’ve had three jobs – American University for five years – loved it. Had success there, really learned what it meant to be a coach and be a mentor of young men.

Then I ran the program at the Junior Tennis Champions Center at College Park (Maryland), a program that produced Frances Tiafoe and Denis Kudla.

TPN: You played with Patrick McEnroe and you succeeded him in Player Development. That’s a big name to follow. When you came in, what were you looking at, at first and what challenges coming in did you see or do you still see and how are you tackling them?

The two biggest most impactful things that Patrick did were one – to bring in Jose Higueras as our Director of Coaching and to really create a comprehensive teaching and coaching philosophy in collaboration with the private sector. I think that has really unified the country, not in a cookie cutter prescriptive approach to training players, but in a framework that kind of unifies us in terms of how we see the game, how we train players and how we talk about the game.

And the second is the Team USA initiative that started under Patrick about four years ago where we made a concerted effort to reach out to the private sector, be more collaborative, be more inclusive. Making sure that all of the information was going through private coaches and really build and strengthen that trust with private sector coaches who are the ones doing the work in the trenches with those young players.

So, when I came in, I definitely saw those two things as working, but I also saw some opportunities to invest more in areas where there is a need. So a few of the things that we did, one is we had a need to support our best players between 100 and 300. Those young pros just coming out, they’re doing well, can’t afford to travel with a full team and we know from doing studies that the faster a player breaks into the Top 100, the more likely they are to go farther to become a Top 50 or Top 20 player. So we created Team USA Pro Department, that provides supplemental support for all of our American pros between 100-300 and that’s been really successful.

Tom Gullickson on the men’s side, and Kathy Rinaldi on the women’s side, supported by Jeff Russell, have done a great job of helping those players to move a little bit faster, giving them support on the road.

The other thing that we’ve done is that we’ve really increased our investment financially and from a human resources perspective in college tennis. That was an area, obviously, you look at our rankings, you look at John Isner and Steve Johnson. They’re our top two Americans, both went to college for four years. We’ve got Nicole Gibbs, Irina Falconi, Jennifer Brady doing well. So that was an area where we really weren’t investing a lot. I think we were a little too focused on the players who could turn pro coming out of high school and I saw that as an opportunity that we needed to capitalize on.

So those are two moves that I made to capitalize on opportunities to help more players and to help them progress a little bit faster and make sure those college players are getting the emotional support as they go into college, and making sure that we are totally engaged with college coaches to help with the developmental process.

TPN: In years past really good juniors would go straight into the pro ranks. You see a lot of them now thinking about going to college, because you see with both the men and the women, they’re older when they make an impact in majors it seems.

MB: Absolutely. I think there are two factors – one, the physical demands of the game have increased so much. The game is so much more physical, so it’s hard for a girl or a boy to compete with women and men. The other piece of it is that players are taking such good care of their bodies. Their nutrition, they are traveling with a physio. They’re stretching more than they ever have been.

The average age of the Top 100 player has gone up, I think it’s about 28 and 1/2 on the men’s side and almost 25 on the women’s side. If we had said that 20 years ago, people would have thought that you were crazy, but those two factors, the physical demands of the game and the fact that players are taking really good care of their bodies are contributing to that. So that’s why I think you don’t see as many junior players bursting on to the tour the way we did in the 80’s and early 90’s.

TPN: Speaking of groups of “kids” as it were, its seems that on the men’s side, like the Tiafoes and the Taylor Fritzes are coming up together. I guess we haven’t seen that since, I don’t know Agassi, Sampras and Courier? Some of them are down in Florida. There must be a lot of camaraderie down there with them all coming up together.

And the other great thing is when the younger players play our established older players that really creates a lot of positive pressure as well. So when one of that group you mentioned plays Stevie (Johnson) or Sam (Querrey) or Donald (Young), they really, really want to win. The older guys want to win. They don’t want to lose to one of these young guys and the younger guys really want to make a breakthrough and beat one of those established guys and that’s a very healthy dynamic.

We’re seeing that on the women’s side as well. The women were a little bit ahead demographically. After this tournament we’ll have 15 women in the Top 100. We’ve got Madison (Keys) playing really well. We’ve got Christina McHale playing well. Sloane (Stephens) when she is healthy, will be back doing well. CoCo Vandeweghe has such a big game. Shelby Rogers breaking through at the French. Louisa Chirico. So all of these women, I think are really poised to get to the next level. And luckily we have two amazing champions in Serena and Venus (Williams) to really set the bar where it needs to be, right at the top.

MB: Coming in my first month, our Sponsorship department on the pro side told me that this was a partnership they had been looking to form, if they could find the right partner and design a deal with the right parameters. So I gave my input as it related to what would be beneficial to player development. I didn’t give my input specifically, it needs to be Adidas or it needs to be Nike, but just in terms of what would really help Player Development and then Lew Sherr (USTA Chief Revenue Officer) kind of reached out in the market place. Spoke to a lot of big companies and at the end of the day it was Adidas that wanted to make the direct investment, not just in Player Development, which is going to be very beneficial to us, but also in our junior competitive national tournaments, in the national campus, in leagues.

Again, as I said during the press conference, it’s really encouraging to see a global leader in our industry making a direct investment back into the game.

TPN: A lot has been done, what more do you want to do? What’s on your wish list for Player Development?

MB: If I kind of take a step back, I think what are the two big things that Player Development does or should do. I think on the one side, it’s to create really strong relationships with our players, parents and coaches across the board, from juniors all the way through to the pros.

On the other side it’s to make sure that the expertise and the performance support that we give to those players as a result of those strong relationships, is the best in the world. So there is a performance excellence component and there’s a relationship component and if you don’t have both of them, you are not going to be effective. Because it doesn’t matter how much you know or how good you are at what you do, if you don’t have relationships and trust with the players.