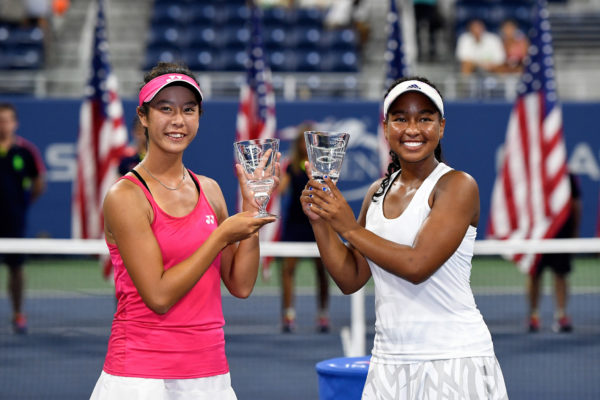 Given a wild card into the tournament by the USTA, Southern Californian’s Hart, from Colton, and Shibahara, from Rancho Palos Verdes, came back to defeat the American team of Kayla Day (Santa Barbara) and Caroline Dolehide (Hinsdale, Ill.) on the Grandstand Court, 4-6, 6-2, 13-11. It was the first time since 1992 that there was an all-American girls’ doubles final.

Just last month, Hart-Shibahara defeated Day and Dolehide in the quarterfinals of the USTA National 18s Hardcourts in San Diego and went on to win the tournament. By virtue of that win, Hart and Shibahara were also given a wild card into the women’s main draw. The pair lost to the No. 7-seeded team in the world, Sania Mirza and Barbora Strycova, at the US Open two weeks ago.

Hart and Shibahra, who have been playing together off and on since age 11, dropped just two sets in the tournament and upset the No. 1 seeds in the first round of the US Open Juniors.

“That was definitely a huge confidence booster for us,” Hart said. “And just having the experience of playing in the main draw, and then beating then beating the top seeds. We knew we could beat anyone after that.”

Added Shibahara of playing in a third-set tiebreaker: “The tiebreaker was extremely close, and we were all so nervous. But I think we were able to handle our emotions and stay loose. Anything can happen in a 10-point tiebreaker.”