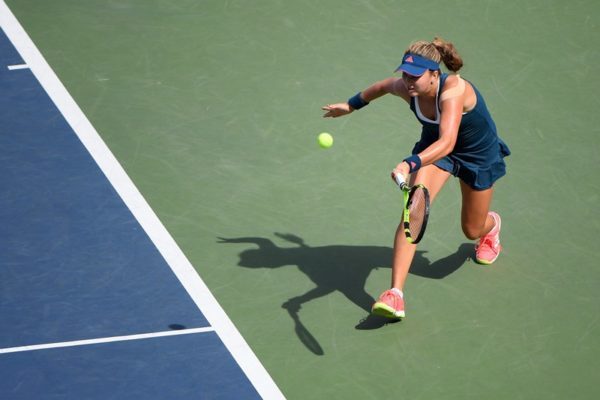 September 11, 2016 – Kayla Day in action against Viktoria Kuzmova in the girls’ singles final during the 2016 US Open Junior Championships at the USTA Billie Jean King National Tennis Center in Flushing, NY.

In her post-match news conference, Day was notified that on Monday she would be the new International Tennis Federation No. 1 world-ranked junior girls player.

“These were like the best two weeks of my life,” said Day after the match. “Every day was great. I had so much fun every single day, and it was just a great experience overall.”

Day showed amazing resiliency coming back from a tough three-set semifinal win in singles on Saturday, and then falling in the doubles final later that evening after holding two championship points.

“I think I was really able to mentally set aside what had happened last night and just move on, because I knew I had a really important match today,” Day said. “I knew I had to forget about it, and that’s what I did.”

She added: “I think I’m pretty good about, you know, leaving the past behind me and just focusing on being in the moment.”

Day, who also reached the second round of the women’s draw talked about the mental side of playing in both the junior and pro tournaments.

“I think mentally it was a little bit hard just because it’s such a long time being here,” she said. “I have been here for I think over three weeks.

“But my coach told me I needed to separate the two tournaments, like to really make sure when I come back to play juniors like I’m coming to play a new tournament.”

Day became only the seventh American girl to win the US Open Junior singles title since Lindsay Davenport in 1992, a span of 24 years. She is also the first American to win here since 2012 (Samantha Crawford) and joins a list of champions that includes Grand Slam women’s champions Victoria Azarenka, Davenport and Jennifer Capriati.

Day is the first from Santa Barbara to win a junior singles title since Tim Trigueiro did it back in 1985 winning the boys title.