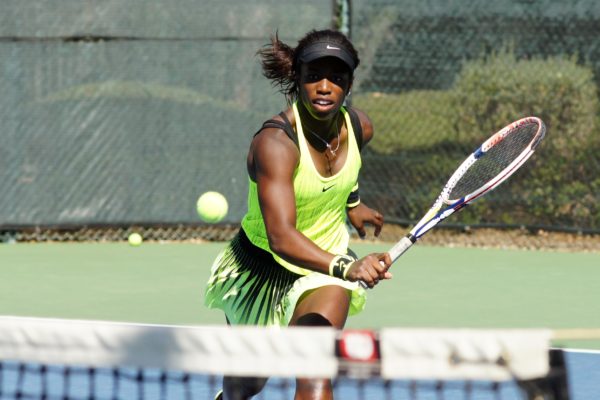 SUMMERLIN (Sept. 29, 2016) – For the second time in three days, 21-year-old Floridian Sachia Vickery found herself down a set and 1-4, only to claw her way back and win in three sets at the Red Rock Pro Open taking place at the Red Rock Country Club.

On Thursday, Vickery did it against Red Rock Pro Open defending champion Michaella Krajicek of the Netherlands, playing more aggressive and taking more chances in the latter stages of the match in a 2-6, 6-4, 6-2 victory.

It was sweet revenge for Vickery, who lost a tough three-set match to Krajicek in the second round here last year. Vickery is a Red Rock Pro Open veteran who first played in Las Vegas five years ago when the event was played at Darling Tennis Center and sponsored by Redfoo and his Party Rockin gang.

“I liked the way I fought back and competed today,” Vickery said. “I knew what I was doing wrong and was able to turn things around in my first two matches here. I’m feeling my way into this tournament and it’s great to be in the quarterfinals.”

Vickery will next face Argentina 19-year-old Nadia Podoroska in the quarterfinals of Friday. Vickery is in Las Vegas with her mother and coach Stefano Vukov of Pro World based in Delray Beach, Fla.

Podoroska, one of three teenagers in the final eight, looked impressive in upsetting the No. 2 seeded Mandy Minella from Luxembourg, 6-3, 6-2.

A pair 17-year-olds also marched into the quarterfinals as American Sonya Kenin and Fanni Stollar both moved on. Kenin won her first set over Kristie Ahn, 6-3, but Ahn then retired from the match because of an injury. The qualifier Stollar of Hungary needed two tiebreakers to beat Belgium No. 4 seed Elise Mertens.

Las Vegas resident Jovana Jaksic of Serbia played composed tennis against former world-ranked No. 27 Laura Robson of Great Britain, taking her out 7-6 (5), 2-6, 6-4. Robson has suffered various injuries and is currently ranked No. 225 in the world, while Jaksic is at No. 181.

Other Americans advancing to the quarterfinals were former USC All American Maria Sanchez, at age 26 the oldest singles player remaining, who beat fellow American Jamie Loeb, 2-6, 6-3, 6-2, and No. 6-seeded Taylor Townsend.

Later in the day, Jaksic and Townsend teamed to advance in doubles as the pair beat Robson and American Sophie Chang, 6-4, 6-2. This is the second time in two months that Townsend has paired up with an American as she and Las Vegas’ Asia Muhammad made had a nice quarterfinal run in the US Open last month.