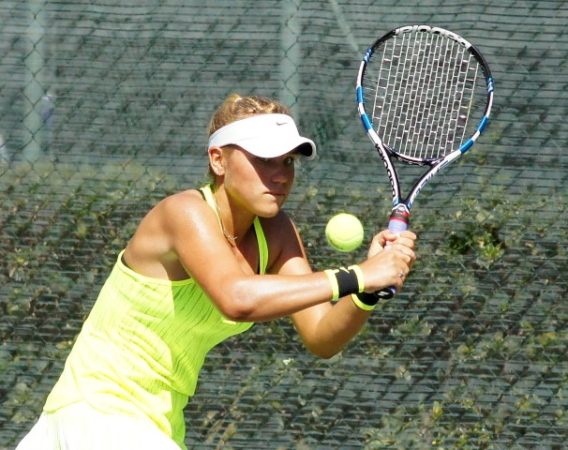 SUMMERLIN (Sept. 30, 2016) – Junior tennis rivals and fellow 17-year-olds Sonya Kenin and Fanni Stollar are each one victory away from a meeting in the final at the eighth annual Red Rock Pro Open being played at the Red Rock Country Club.

Kenin will face 19-year-old Nadia Podoroska Argentina at 11 a.m. in one semifinal, while Stollar will play top-seeded Alison Van Uytvanck of Belgium in a semifinal match to follow.

“I knew she had a good serve so I was focused on my return,” said Kenin, who beat Sanchez in their only other career meeting, also in three sets, two years ago in qualifying at the Albuquerque, N.M., $75,000 Challenger when Kenin was just 15 years old. “She’s a pretty aggressive player so I knew I had to move her around and control the points.”

Kenin, who is still an amateur and has not turned pro, won her first $25,000 ITF pro tournament in Florida in January, and won the $50,000 Sacramento Challenger in July.

Kenin won the USTA Pro Circuit Wild Card Challenge to earn a wild card into this year’s US Open, where she faced eventual finalist Karolina Pliskova in the first round. As a junior player, Kenin reached the singles final at the 2015 US Open Junior Championships, the semifinals of this year’s junior US Open and the quarterfinals of 2016 junior Wimbledon. She also won the 2015 USTA Girls’ 18s national title to earn a wild-card berth into the US Open women’s singles draw for her first Grand Slam main draw.

In the doubles final set for Sunday at 11 a.m., it will be American Jamie Loeb and Chanel Simmonds of South Africa against Michaella Krajicek of the Netherlands and Sanchez.

Starting at 11 a.m. on Stadium Court