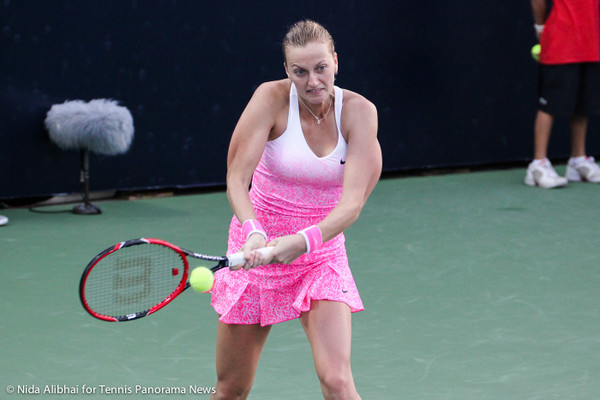 The 16th ranked Czech will move up to No. 11 in the world, while the Slovak Cibulkova will to a career-high No. 8 in the world on Monday.

“It’s great for sure to win it for a second time,” said the two-time Wimbledon champion. “I’m happy for that, how I played all week. I think it was amazing really. Especially everything started with the match against Angie (Kerber) when we really play long. It was great match from both of us. I think it was a big really fight.

”I’m really, you know, happy how I played afterwards, as well, how physically I managed to play great, even I didn’t really felt the best, but I was still mentally strong and I was try to really play my game, which was really important.”
“I have to say she played extremely well,” Cibulkova said. “I couldn’t do much more today on the court because she didn’t let me do so. I can’t regret anything. Okay, few balls I could do better, but otherwise she was just playing, you know, too good. Sometimes it happens.

“She’s a great player. When she’s playing like this, she can beat anybody. You know, I have to see the big picture. I had a great week here. Today’s final, you know, she was just playing really, really well and I couldn’t do much about it.”

Cibulkova talked about the difference in Kvitova’s game on Saturday: “he was just really hitting everything full power. She was just serving really well, going for returns. I couldn’t really play my game that I played during this week. Couldn’t get in the long rallies or in the rhythm because she didn’t let me. She was really powerful from the first strokes. That’s how she overpowered me today.”

“I think I played great six matches in six days, which it’s unreal for me to just think about,” said the Czech. “I’m really proud of myself how I did it, how I handle it physically, how everything went.

“Even I came late to my hotel room, I couldn’t really fall asleep straightaway, so it took me a while to get over it. I was sleepy all day. I really had to start warming up and prepare for the match which always kind of gave me some kind of, you know, like ready to be there.

“Especially the match against Angie was really difficult, for sure. The next days, I mean, playing Konta or Halep, they are really great players, Domi today. I was able to play and not have that many unforced errors.

“Yeah, I mean, that’s the tournament. I need this kind of consistency all year, which to be honest, I don’t think I can really do that. I’m probably the player who has up and downs. Of course, I going to try to be better in the downs. But I don’t really think that I can be, like, consistent all season. I’m just how I am probably, and I can’t really change it.

“I’m happy that my ups, they are really high, which I love of course. The downs are very low, but that’s how it is.”

In the doubles final, Bethanie Mattek-Sands and Lucie Safarova won the title. The victory qualifies the team for the WTA Year End in Singapore.

“I think we had an amazing match today,” Safarova said of the 6-1, 6-4 win over Mirza and Strycova. “We came out strong from the beginning. We returned great, served great, took their time away. That was the right strategy.”

“We knew we were going to be close [to qualifying for WTA Finals] if we won,” Mattek-Sands said.  “But it’s something that we weren’t really in contention until before US Open. We were pretty far from it. But it’s amazing to make it again. Singapore obviously is the best of the best. Yeah, but we literally just found out right after the match.”

In Tashkent, Kristyna Pliskova defeated defending champion Nao Hibino 6-3, 2-6, 6-3 to win her first WTA-level title. She is the twin sister of US Open finalist Karolina Pliskova.