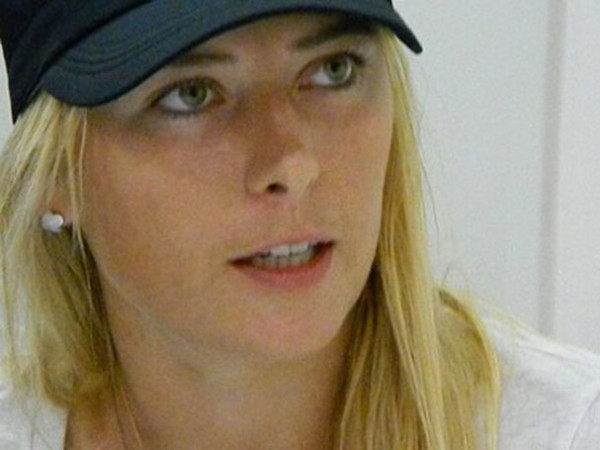 From the International Tennis Federation: CAS decision in the case of Maria Sharapova

4 October 2016 – London, ENGLAND – An appeal panel appointed under the Code of Sports-related Arbitration of the Court of Arbitration for Sport (“CAS”) has reduced the sanction imposed on Maria Sharapova by an Independent Tribunal on 8 June 2016 from 24 months to 15 months. The results and prize money that Ms. Sharapova earned at the 2016 Australian Open remain disqualified. Her period of ineligibility will now end at midnight on 25 April 2017.

Ms. Sharapova, a 29-year-old player from Russia, provided a urine sample on 26 January 2016 that was found to contain meldonium, which is prohibited under section S4 (Hormone and Metabolic Modulators) of the 2016 WADA Prohibited List. She admitted her consequent violation of the Tennis Anti-Doping Programme, and noted that the meldonium was the active ingredient of a medication, Mildronate, that she had been taking for ten years, and that she had not realised it had been added to the Prohibited List as from 1 January 2016.

An Independent Tribunal appointed under Article 8.1.1 of the Tennis Anti-Doping Programme found that Ms. Sharapova bore significant fault for her violation, because (among other things) she had failed to put in place an adequate system to check for changes made each year to the Prohibited List. It therefore imposed on Ms. Sharapova a period of ineligibility of two years, backdated to commence on 26 January 2016. Her results at the 2016 Australian Open were disqualified, and the ranking points and prize money that she won at that event were forfeited.

Ms. Sharapova appealed that decision to CAS on the basis that she bore No Significant Fault or Negligence for her anti-doping rule violation and therefore her ban should be reduced from two years to “time served” (i.e., she should be free to start competing again from the date of the CAS panel’s decision).

Following a hearing on 7 and 8 September 2016, the CAS panel found that Ms. Sharapova had a reduced perception of the risk that she took while using Mildronate, because (a) she had used Mildronate for around ten years without any anti-doping issue, (b) she had consulted the Russian doctor who prescribed the Mildronate for medical reasons, not to enhance her performance, and (c) she had received no specific warning about the change in status of meldonium from WADA, the ITF, or the WTA. In addition, the CAS panel considered that it was reasonable for Ms. Sharapova to entrust the checking of the Prohibited List each year to her agent.

However, the CAS panel found that Ms. Sharapova was at fault for (a) failing to give her agent adequate instructions as to how to carry out the important task of checking the Prohibited List, and (b) failing to supervise and control the actions of her agent in carrying out that task (specifically the lack of any procedure for reporting or follow-up verification to make sure that her agent had actually discharged his duty). The CAS panel also noted Ms. Sharapova’s failure to disclose her use of meldonium on her doping control forms.

Taking all of these circumstances into account, the CAS panel determined that, although Ms. Sharapova was at fault, her plea of No Significant Fault or Negligence should be upheld, triggering a discretion to reduce the otherwise applicable two year sanction by up to 50 per cent. Based on its analysis of Ms. Sharapova’s degree of fault, the CAS panel decided that the sanction should be reduced in this case to 15 months.

The full decision is available at www.itftennis.com/antidoping

The Tennis Anti-Doping Programme applies to all players competing at Grand Slam tournaments and events sanctioned by the ITF, ATP, and WTA. Players are tested for substances prohibited by the World AntiDoping Agency and, upon a finding that an Anti-Doping Rule Violation has been committed, sanctions are imposed under the Programme in compliance with the requirements of the World Anti-Doping Code. More information on the Programme, sanctions, statistics, and related matters can be found at www.itftennis.com/antidoping. 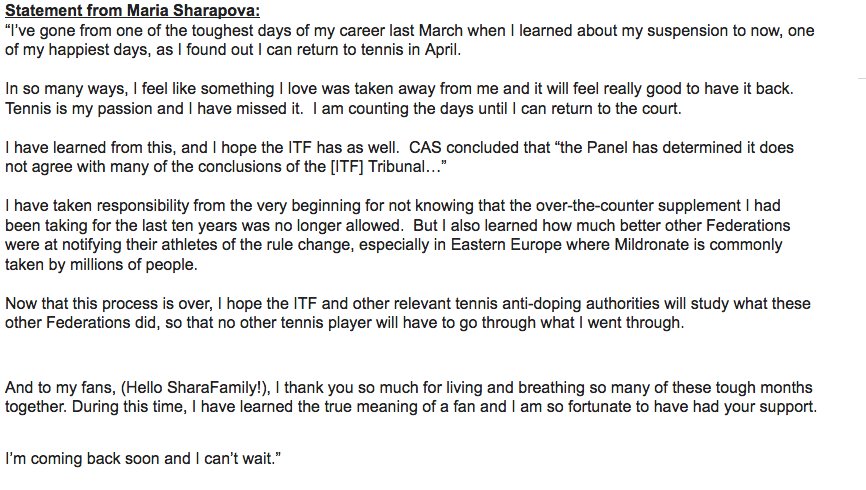