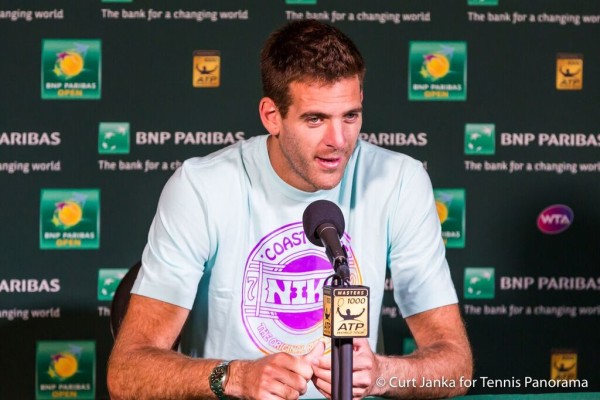 (October 23, 2016) Juan Martin del Potro won his first tournament in 33 months on Sunday when the Argentine beat sixth seed, American Jack Sock 7-5, 6-1 for the If Stockholm Open crown. This is his 19th ATP World Tour title. The 2009 US Open winner last won a tournament back in January of 2014, when he claimed the Sydney title.

“I’ve been trying to fix my problems for the past two years and I didn’t expect to win a title at this moment in my career,” Del Potro said. “I am so happy to get the trophy here. It’s motivation for looking forward to the future.

“I don’t really mind the rankings or the numbers. I just want to play better. When I’m 100 per cent I know I can be dangerous.”

“It was a tough match,” the top American man said. “His serve is massive and very tough to read, which put more pressure on my serve. He just played well today. I’ve had a long week here and it might have caught up with me a bit.”

The doubles winners were a pair of hometown heroes, as Swedish brothers Elias and Mikael Ymer won home soil beating Mate Pavic and Michael Venus. They are the first Swedish duo to win in Stockholm since 1998, when Nicklas Kulti and Mikael Tillstrom did it.

“I don’t think me or Mikael expected our first ATP title to come in doubles, especially here in our hometown of Stockholm, “ Elias said. “We had a great time and I really enjoyed playing with my brother.”

“It’s been unreal,” Mikael said. “We clicked really well and played some great doubles. I’m really happy with this win and I’m excited for our future together in doubles.”
RESULTS – SUNDAY, 23 OCTOBER 2016