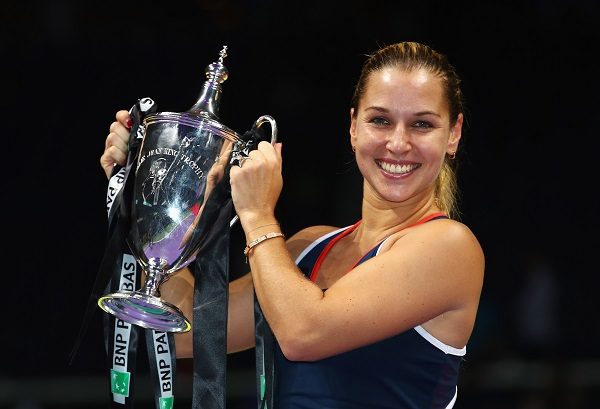 SINGAPORE – OCTOBER 30: Dominika Cibulkova of Slovakia poses with the trophy after victory in her singles final against Angelique Kerber of Germany during day 8 of the BNP Paribas WTA Finals Singapore at Singapore Sports Hub on October 30, 2016 in Singapore. (Photo by Clive Brunskill/Getty Images)

(October 30, 2016) In her debut appearance at the WTA Finals in Singapore, Dominika Cibulkova beat World No.1 Angelique Kerber to win the Billie Jean King Trophy. It’s the biggest title of the Slovak’s career. Cibulkova is a former Australian Open finalist. She’ll move up to No. 5 in the world in the new rankings.

Cibulkova gained a little revenge in the 6-3 6-4 victory in final over No. 1 Angelique Kerber in an hour and 16 minutes on Sunday. The Slovak lost to Kerber in her first round-robin match earlier in the week.

“I have no words, coming here for the first time, the biggest tournament of my life,” said Cibulkova. “I still don’t know how I won. I put the ball over the net and it went in. It’s the happiest moment of my life.” 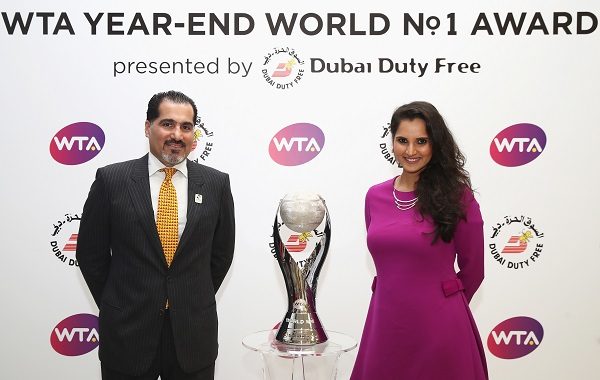 “It’s very, very exciting to finish two years in a row as No.1,” said Mirza. “It’s been an incredible year for me again, with seven WTA titles, a Grand Slam and ending the year at the WTA Finals in Singapore. Finishing the year No.1 is amazing – it’s a dream come true and gives me motivation and inspiration to come out and work even harder next year.”