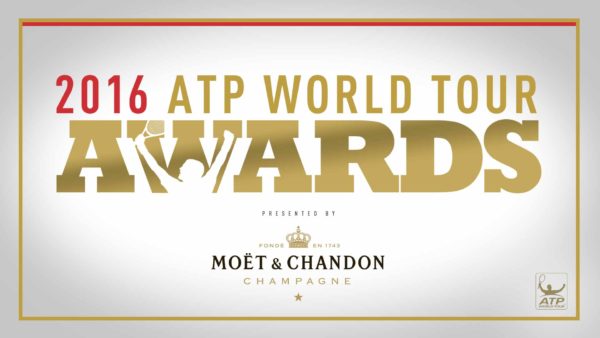 ATP WORLD TOUR, LONDON – Roger Federer, Juan Martin del Potro and Bob and Mike Bryan have been honoured in the 2016 ATP World Tour Awards presented by Moët & Chandon. While the ATP World Tour No. 1 presented by Emirates award is still to be decided in singles between Andy Murray and Novak Djokovic and in doubles between Pierre-Hugues Herbert/Nicolas Mahut and Jamie Murray/Bruno Soares, the other award winners have been announced today.

Federer has been selected by fellow players as winner of the Stefan Edberg Sportsmanship Award for a 12th time and by fans as the ATPWorldTour.com Fans’ Favourite presented by Moët & Chandon for a 14th straight year. Since 2003, Federer has won a record total of 33 ATP World Tour Awards.

The Bryan brothers also extend their reign in the doubles category for ATPWorldTour.com Fans’ Favourite presented by Moët & Chandon to a record 12th straight year.

Juan Martin del Potro reclaims honours in the player-voted Comeback Player of the Year category, joining Sergi Bruguera and Tommy Haas as the only individuals to win this award twice. Lucas Pouille has been voted as the Most Improved Player of the Year, edging fellow nominees Daniel Evans, Dominic Thiem and Alexander Zverev, the recipient of last year’s ATP Star of Tomorrow Award presented by Emirates. American Taylor Fritz, 19, succeeds Zverev in this category this season as the youngest player ranked in the Top 100 of the Emirates ATP Rankings.

Marin Cilic has been honoured with the Arthur Ashe Humanitarian Award for off-court philanthropy through his foundation, which supports educational projects and aspires to give young people improved access to education.

Magnus Norman, Stan Wawrinka’s coach, has been chosen by his peers as the winner of the first ATP Coach of the Year Award, which honours the coach who helped guide his player to a higher level of performance during the season.

Mike Dickson from the Daily Mail is the recipient of the Ron Bookman Media Excellence Award while the ATP Tournament of the Year awards will be announced in 2017.

ATP World Tour No. 1 presented by Emirates
(determined by Emirates ATP Rankings)
Andy Murray and Novak Djokovic will battle for the year-end No. 1 Emirates ATP Ranking at the Barclays ATP World Tour Finals. Murray rose to the top spot for the first time on Monday after winning his tour-best eighth title of the season, becoming the 26th player in history to be ranked World No. 1. Djokovic has clinched this award four times and this week looks to win his eighth title of the season and sixth at the season finale.

Comeback Player of the Year
(voted by ATP players)
Juan Martin del Potro: The 28-year-old Argentine was previously voted by his peers as the Comeback Player of the Year in 2011 following a successful return from right wrist surgery. He finished back in the Top 10 in 2013, only to be sidelined again – this time by a left wrist injury requiring multiple surgeries. Outside the Top 1000 of the Emirates ATP Rankings early in 2016, del Potro made his return in February with a semi-final effort at the Delray Beach Open and rose to No. 38 by November with a 30-match win effort. Among his season highlights, del Potro beat then-No. 1 Novak Djokovic and Rafael Nadal en route to a silver medal at the Rio Olympics, made the quarter-finals of the US Open and won his first tour-level title since 2014 at the If Stockholm Open, securing his return to the Top 50. Julien Benneteau, Ivo Karlovic and Florian Mayer were also nominated in this category.

Most Improved Player of the Year
(voted by ATP players)
Lucas Pouille: The 22-year-old Frenchman continued his steady improvement in his fifth professional season, climbing from a No. 91 Emirates ATP Ranking in February to a career-high No. 15 by the end of 2016. Pouille clinched his first ATP World Tour title in September at the Moselle Open, five months after reaching his first tour-level final at the BRD Nastase Tiriac Trophy in Bucharest. In between, he reached consecutive Grand Slam quarter-finals at Wimbledon and the US Open and an ATP World Tour Masters 1000 semi-final at the Internazionali BNL d’Italia in Rome. Pouille compiled a 34-22 match record, nearly tripling his match wins total from last season (12-14).

Stefan Edberg Sportsmanship Award
(voted by ATP players)
Roger Federer: Fellow players voted the Swiss as the winner of the Stefan Edberg Sportsmanship Award for the 12th time and sixth year in a row. He also won the award six straight years from 2004-09. Andy Murray, 2010 winner Rafael Nadal and Stan Wawrinka were also nominated in this category.

Arthur Ashe Humanitarian of the Year
(awarded by ATP)
Marin Cilic: The Croatian established the Marin Cilic Foundation this year. With a goal of supporting educational projects around the world, the foundation has a special emphasis on giving youth in Croatia improved access to school and university education. “The main focus is to try to help kids as much as we can,” Cilic said upon the Foundation’s formal launch in June. “I want to give something back and also give some opportunities for some people and some kids that don’t have as many possibilities to pursue their dreams.”

Ron Bookman Media Excellence Award
(awarded by ATP)
Mike Dickson: Dickson has been a tennis correspondent for nearly two decades with the Daily Mail, which has the most visited newspaper website in the world. He has also covered golf, football, rowing and four Olympics Games, and served as the chief cricket writer for nine years. He came up to ‘Fleet Street’ via working as a general news reporter on local newspapers and local radio.