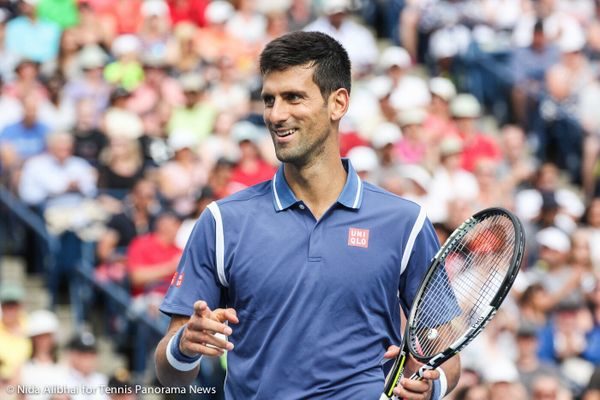 (November 17, 2016) Novak Djokovic in his quest to end the year as No. 1, dismissed David Goffin 6-1, 6-2 to complete a perfect 3-0 round robin record at the ATP World Tour Finals at London’s O2 Arena on Thursday. Goffin, from Belgium, was an alternate for Gael Monfils who withdrew with a rib injury.

Djokovic, who says he likes the round robin format, thinks it should be used for the Olympics.

“I think this format is exciting,” said the Serb. “I mean, look, it’s the only tournament in the year that we have this kind of format. I like playing in the round-robin system.

“To be honest, I think certainly events, maybe like Olympic Games, should have this format. I guess you play more matches. The people like to see the top players being at least for a couple matches, two, three matches, in the tournament. It gives more value to the event.

“Of course, it makes you feel also more, I guess, at ease because you know you’re going to play at least three. Even if you lose a match, you can have a chance to qualify for the knock-out stage.”

The 12-time major champion also talked about changing the Davis cup format and added his suggestions:

“Of course, they have to change. They need to have the format, in my opinion, the only way to work, is once a year, one or two weeks, two weeks, have a round-robin format, four, five, six groups, have teams play in different locations, then come together in one location and play a knock-out stage, quarterfinals, semifinals, final four, whatever.

“It’s a no-brainer. I’m not the only one to have this kind of opinion about it. Many of the players have been talking about this format and the schedule, top players especially, because it just comes right after Grand Slams, right after World Tour Finals.

“Playing over three days, best-of-five… I think they should cut it down to two days, best-of-three. Have two singles and one doubles, those kind of things.

“In tennis, it’s a bit confusing with the ITF, ATP, Grand Slams. Everybody is a separate entity. You have to consider different sides and negotiate.

“ITF owns Davis Cup. ITF hasn’t been really very helpful with the players’ demands. The only thing that they wanted to change is the neutral final, I think for next year or the year after that, which talking to all the players on the council, most of the players also around the tour, nobody agrees with that. Again, you’re taking away from the players the one thing that players love about Davis Cup, which is the home tie, the home crowd.

“Yeah, I don’t know how the future of Davis Cup will look like. I mean, I respect that competition. It has a long history. I love playing for my country. This is the only official team competition we have in our sport.

“But there is definitely something radically that has to change. I don’t know if they realize, but they’re losing a lot of value in terms of commercial perspective, marketing perspective, whatever.

“People don’t know the format of the competition, the system, how it works, who plays who, until it gets to the finals. Even the finals is not as attractive in some countries anymore.”

Djokovic qualified for the semifinals on Tuesday. Milos Raonic defeated Dominic Thiem 7-6(5), 6-3 to clinch the second semifinal spot from the group.

Raonic become the first Canadian to reach the singles semifinals of the year-end event.