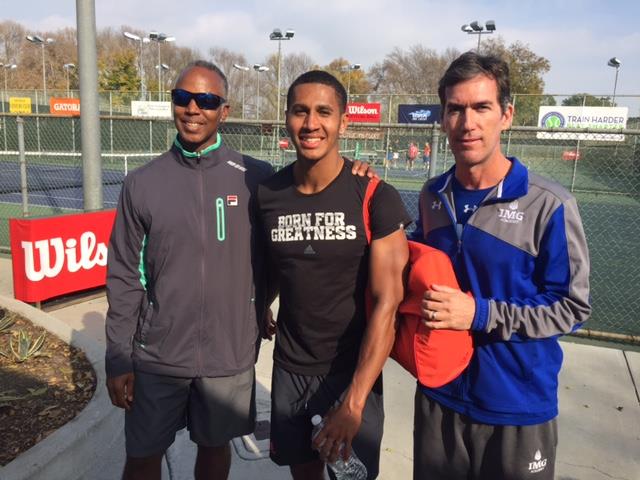 USTA: (November 18, 2016) Michael Mmoh, 18, of Bradenton, Fla., has earned a berth into the main draw of the 2017 Australian Open by clinching the USTA Pro Circuit Australian Open Wild Card Challenge today. This will mark Mmoh’s first appearance in a Grand Slam main draw outside the United States.

Mmoh, who also earned a wild card into the 2016 US Open by winning the USTA Boys’ 18s National Championships, secured the Australian Open berth by winning his first USTA Pro Circuit Challenger title at the $50,000 Knoxville Challenger in Tennessee last week and reaching the quarterfinals of the $50,000 JSM Challenger of Champaign-Urbana in Champaign, Ill., this week to finish the challenge with 95 points. Jared Donaldson, the only player who could surpass Mmoh, lost in today’s semifinals in Champaign and could not gain enough points to earn the wild card. Mmoh is currently ranked a career-high No. 204 in the world.

Mmoh has had a breakout fall 2016, transitioning from the juniors to the pros and reaching his first USTA Pro Circuit Challenger final at the $100,000 Challenger in Tiburon, Calif., as a qualifier in October, prior to winning Knoxville. Also this year, he made his Grand Slam main-draw debut at the US Open, qualified for the ATP’s Memphis Open and competed in the main draw of the ATP event in Miami, while also winning the $25,000 USTA Pro Circuit Futures in Bakersfield, Calif.

The rising young American peaked at No. 2 in the junior rankings in 2015 after reaching the singles semifinals at the junior French Open and the quarterfinals at the junior US Open. He also competed in the junior Australian Open and Wimbledon in 2015, reaching the doubles semifinals at both tournaments. In 2014, Mmoh went 5-0 in singles to help lead the U.S. to the Junior Davis Cup title, and he won his first career USTA Pro Circuit singles title at the $15,000 Futures in Brownsville, Texas. He added two additional USTA Pro Circuit titles in 2015.

Mmoh, who was born in Saudi Arabia but grew up in the U.S., trains with coach Glenn Weiner in Nick Bollettieri’s program at the IMG Academy in Bradenton, Fla. He is the son of former ATP professional and Nigerian Olympian Tony Mmoh.

Kayla Day, 17, of Santa Barbara, Calif., earned the women’s Australian Open wild card earlier this month. Like Mmoh, Day will be making her second consecutive Grand Slam main draw appearance after earning a wild card into the 2016 US Open by winning the USTA Girls’ 18s National Championships. At this year’s US Open, Day won her first-round match. She then went on to win the US Open girls’ singles title to climb to No. 1 in the world junior rankings.

Final standings and information about the wild card challenge can be found at www.procircuit.usta.com.

The final standings are as follows: 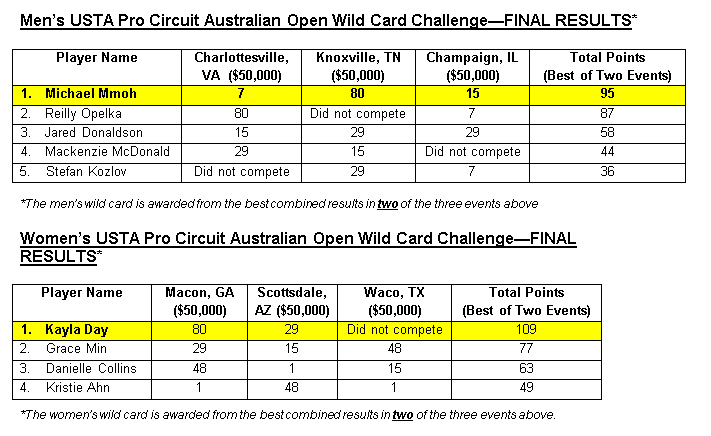