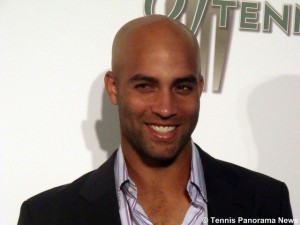 BROOKLYN, N.Y. — James Blake defeated John McEnroe 6-4 to win the PowerShares QQQ Cup Saturday at the Barclays Center, the 12th and final event on the 2016 PowerShares Series, the North American tennis circuit for champion tennis players over the age of 30.

The tournament title was Blake’s third on the PowerShares Series for the 2016 season, also winning the opening event in Chicago in April and in Portland, Oregon in November. The PowerShares QQQ Cup was the first tennis event ever at the Barclays Center, the home of the NBA’s Brooklyn Nets and NHL’s New York Islanders. The event was also the first pro tennis event in Brooklyn since Bill Tilden won the 1935 U.S. Open Pro Championships at the Terrace Club in the Flatbush area of the borough.

The final had a hard New York feel as McEnroe has lived in New York City his entire life and Blake being a local favorite having been born in nearby Yonkers and grew up in the tri-state area in nearby Fairfield, Connecticut.

“I don’t think I have ever played more of a New Yorker in New York than myself since I was born here,” said Blake of playing against McEnroe, who had the majority of the crowd behind him, including his students from the nearby John McEnroe Tennis Academy on Randall’s Island and his wife Patty and brother Mark among other family members. “It makes sense to cheer for John McEnroe. He has done so much for this city and so much for this sport. If I’m not playing against him, I’m in the stands cheering for him too.”

The turning point in the match came at the third deuce point at 4-4 when the 37-year-old Blake ripped a backhand up the line passing shot off a McEnroe half volley to set up break point. He then hit another down-the-line backhand return-of-serve that forced a McEnroe half-volley error to break serve. Blake then benefited from two missed backhands from the 57-year-old McEnroe while connecting on two forehand winners to close out the win.

“I was just praying that he would miss a few first serves at the end,” said Blake, who was born four months after McEnroe won his first major singles title at the 1979 U.S. Open. “I was trying to get chances early on, but he erased them all with good serves. I pray that I can serve that well at 57 years old, or moving or anything he is doing this well at 57. I am just happy to get through it. I got a little lucky at the end and took advantage of my one chance on his serve.”

Each PowerShares Series event features two one-set semifinal matches and a one-set championship match and, for the second straight year, players make their own line calls with assistance of electronic line-calling.

The full 2016 PowerShares Series list of events and final-round results are as follows;