You are here: Home / Features / Venus Williams Advances to Second Round of Australian Open 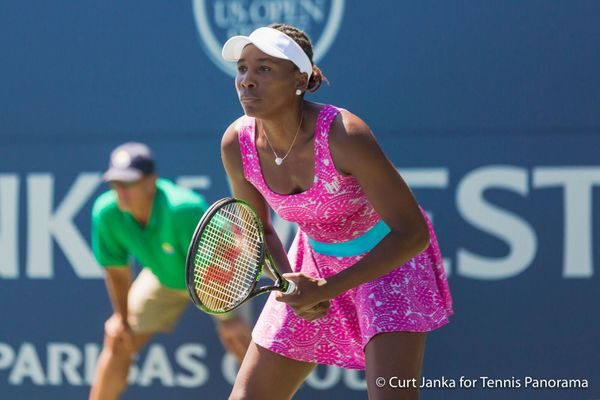 (January 16, 2017) Seven-time major champion Venus Williams opened up her Open Era record 73rd major with a tough 7-6(5), 7-5 victory over Kateryna Kozlova on the first day of the Australian Open on Monday in Rod Laver Arena. The 13th seed came back from a break down in the first set and 0-2 in the tiebreak and overcame 48 unforced errors for the win.

The American lost in the first round last year in Melbourne to Johanna Konta, who is now in the WTA Top Ten.
Venus Williams is the oldest competitor in the women’s singles event at 36.

“It’s never easy playing the first round, Williams said after the match. “You’re just trying to find the rhythm.”
“She played amazing. It’s very satisfying to get through a match against an opponent who is on fire.”
Williams talked about the very competitive first set:
“I like to control the match. I think eventually the momentum was shifting and I could control the match, and I haven’t really played in a while.

“So it was kind of hard to go out there and think, oh, it’s going to be perfect rhythm. But after the first set I felt more rhythm. Hopefully going through the tournament, I will just feel more and more rhythm.”

During her news conference, Venus was asked questions about her sister Serena’s recent engagement:
“She’s much smarter than I am. That’s pretty much… She’s a wise woman. She’s actually getting a real life.
“She’s paving the way, once again, for me. Maybe I’ll grow up.”

“Yeah, he’s a super nice guy that — you never know how the things are going to end. In this case, it’s not gonna end, so it’s great.”

The 2003 finalist will player winner of Kurumi Nara – Stefanie Voegele in the second round.