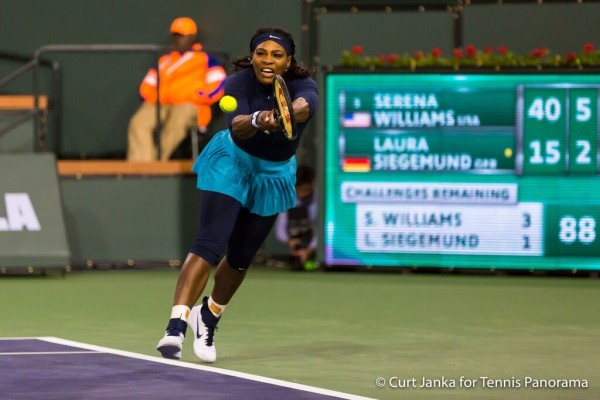 (January 17, 2017) No. 2 seeds Serena Williams and Novak Djokovic took their first steps in their quest for a seventh Australian Open title on Tuesday, each winning in straight sets.

Djokovic beat Fernando Verdasco in the first round of Melbourne 6-1, 7-6, 6-2. Verdasco almost beat the Serb in Doha earlier this month. He had five match points and could not close the  match. Djokovic came back to win the match and the tournament beating No. 1 Andy Murray in the final.

“I’m very pleased with the first round, considering I had one of the toughest first-round draws, definitely considering his form, how well he played in Doha,” Djokovic said. Just overall I’m feeling good about my performance.

“It was about 10 days ago, the match that we played. So, of course, you still have traces of, I guess, that match, emotions and everything that has happened.

“I use it in a way to just analyze and to get myself prepared for what’s coming up, to just be able to do things better than I’ve done that day in Doha. Even though I won the match, I thought I hadn’t played as well as I did tonight. Starting off a match as I did out of my blocks was obviously very satisfying to experience.

Serena Williams had to hold off a late surge by her first round opponent former Top Ten player Belinda Bencic, winning 6-4, 6-3. The 22-time major champion is now 65-1 in the first rounds of majors.

“I think it was pretty good,” Williams said after the match. “I mean, she’s a really good player. So I think I was able to start out well.

“I just wasn’t as aggressive as I was during those games. You know, she started playing better.

“I made a few errors on some key points, but for the most part, I still was going for everything and I was able to close it out.”

I feel like she’s definitely been having a lot more power. Obviously she beat me in Canada the last time we played, but I really don’t remember much about that match. I do remember — I just felt like she was doing really well.

The recently engaged Williams came into her news conference wearing a shirt which said “Equality.” Williams is engaged to Williams to Reddit co-founder Alexis Ohanian.

Williams said: “with today being Martin Luther King Day, it’s important to spread the message of equality, which is something he talked about a lot and he tried to spread a lot, is equality and rights for everyone.

“With that, Nike and all the Nike athletes really want to be a part of this movement, especially, again, being that it’s Martin Luther King Day. And we really just want to speak up about things that we believe in and talk about equality.”

Rafael Nadal who won the Australian Open in 2009, back from a wrist injury beat Florian Mayer 6-3, 6-4, 6-4 to reach the second round. Nadal lost in the first round last year to countryman Fernando Verdasco.

Nadal: “I think I played solid match, no? It was great to be back on the big stadium. I feel the support of the people, love the people. That is something that is very special for me. Just happy to see the court like this and the people supporting me. So just can say thanks.

“I am happy the way I am playing. I had good weeks of practice. Never easy the first round. Is always little bit more nerves at the beginning. I didn’t play against an easy opponent. The way that he plays is not a conventional game. You know, he change a lot of the rhythm of the point, you know, changing with a slice, then he hit a winner. Then he play little bit slower ball. Is not easy to read his game, no?

“So just am happy the way that I played. I played good all the key points. That’s very important for me.”

In the match of the day, 37-year-old veteran Ivo Karlovic won a five-set marathon lasting five-hours and 15 minutes beating Horacio Zeballos of Argentina 6-7 (6), 3-6, 7-5, 6-2, 22-20.  The match  set a record for most number of games (84) at the Australian Open in matches with tiebreaks. The Croatian  set a record for the tournament hitting 75 aces.

“It was real difficult match,” Karlovic said. It was also difficult mentally because I was down 2-0. I had to also fight against him and against my own head, you know. So it was definitely really difficult.”

“This is what I will, after my career, remember. If it was easy match or I lost easy, I wouldn’t remember. But this one definitely I will remember forever.”