You are here: Home / Features / Kerber Advances in Three Sets, Venus Williams Moves Into Third Round at Australian Open 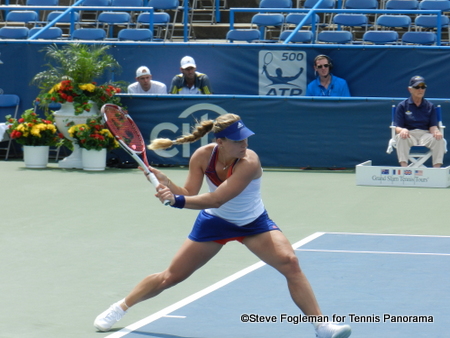 The 29-year-old defending champion looked as though she was going to close out the match in straight sets,
but after taking a 3-2 lead in the second set tiebreak, her opponent amped up her game, while Kerber’s serve
vanished. Witthoeft won the next five points to send the match into a third set.

The two-time major winner had to overcome a break in the first game of the third set, but won four straight games to control the set. The fifth game saw Kerber having to fight off break points in long rallies to keep her edge.

“I was a little bit too defensive today, so I think that was the problem,” Kerber said. “When I was trying, I did, like, few more mistakes.

“So, yeah, I mean, I will try for the next round to really focusing on playing consistent from the first until the last point and not having too much up and downs during the match.

“I was doing I think a lot of mistakes like in the important moments. But at the end, I’m happy that I won the match. It was not so easy. The conditions were, like, also a little bit difficult today.
“At the end, I won, and this is all that counts for me.”

“Of course it was not so easy, especially also with the sun from the one side. But at the end, I was try my best. I’m through the next round, so, yeah, I’m looking forward to being now in the third round.”
During her on-court interview, the crowd serenaded her with the “Happy Birthday” song.

No. 13 seed and 2003 finalist Venus Williams advanced to the third round of the Australian Open, beating Swiss veteran Stefanie Voegele 6-3, 6-2 on Wednesday.

Venus, who was scheduled to play doubles with her sister Serena later in the day, pulled out of the doubles with an elbow injury.

“I was really disappointed not to be able to play in New Zealand. I was hoping to have the capacity to play both events here, but at this point I just need to be careful and just try to maintain myself.”

Venus will play Ying-Ying Duan in the third round.
“I don’t know anything about her,” Williams admitted. “I have never seen her play. Zero, like zero. So I’m going to have to, yeah, see how it goes. Like, maybe get a scouting report in the warm-up when we hit the five minutes and kind of see how it feels.”