You are here: Home / Features / Wildcard Denis Istomin Upsets No. 2 Seed Novak Djokovic in Second Round of Australian Open 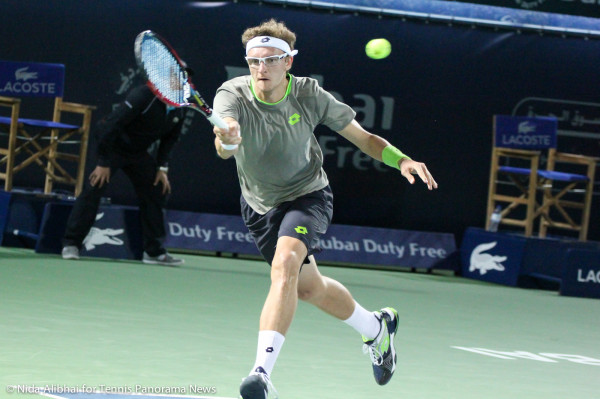 “I feel sorry for Novak. I was playing so good today,” Istomin said in his on-court interview.  “I surprised myself as well.”

This is the first win for Istomin over Djokovic in six tries.

The Uzbek  who ended Djokovic’s 15-match winning streak in Melbourne, will play Pablo Carreno Busta for a spot in the round of 16.

Istomin’s only win against a Top Ten player came in 2012 at Indian Wells when he beat No. 5 David Ferrer. Istomin is 1-33 against Top Ten opponents.

This is Djokovic’s earliest loss at a major since losing to Marat Safin in the second round at 2008 Wimbledon. It’s his first loss to a player ranked outside of the top 100 at a major tournament.

“All credit to Denis for playing amazing,” Djokovic said in his news conference. “He deserved to win. No doubt he was a better player in clutch moments.”

“It is the biggest win for me. It means so much,” Istomin said. “Now I feel I can play with these guys, and to be with them on the same level.”

“It’s a tennis match. On a given day, you can lose. Nothing impossible.”

“We played four-and-a-half hours. It’s just that, you know, it’s one of these days when you don’t feel that great on the court, don’t have much rhythm, and the player you’re playing against is feeling the ball very well.”

“Him playing this well, I mean, it’s amazing,” Djokovic said in his news conference. “He played obviously above his level. You got to give him credit for that. Many things came together for him today. He’s a well-deserved winner.”

“Today Denis, surely he was an underdog, but he didn’t show any nerves in the big moments. I think his experience in playing long time — surely he didn’t play that many big matches, but just everything came together. It was the right moment for him, the right day. He was better.”

This was the first time since 2007 that the 12-time major winner was extended to five sets in the second round. The last time he lost at the Australian Open was in the 2014 quarterfinals to Stan Wawrinka, who went on to win the tournament.

“It is unreal,” Istomin said in his news conference. “To beat Novak in five sets, it’s a great win, you know. I’m still feel tired little bit. I didn’t expect what I’m doing now and what I did on the court.

“I like the way I am playing. I mean, I feel just tired. I don’t think about that I win against No. 2 in the world.”

“If you don’t think that you have a chance, then no reason to come on court, you know. Of course, I also working hard, trying to do my best, and I did today. So that’s it.”

Asked if someone said at the beginning of the year that Istomin would beat Djokovic at the Australian Open, what would you say?

Istomin said: “I would say, Are you crazy or what? Especially in five sets, for sure. For me, was impossible to think about that I can hold it five sets with Novak, physically and mentally.”

In a rematch of the 2015 French Open No. 2 seed Serena Williams beat Lucie Safarova 6-3, 6-4 to reach the third round. Williams hit 35 winners which included 15 aces. She’ll play Nicole Gibbs next.

“That was a great performance,” Williams said. “I played well. She’s a former top-10 player. The last time we played together was in the finals of a Grand Slam.

“You know, it’s not an easy match. She’s a really good player. You have to go for more, which obviously makes a few more errors.”

“She’s not someone you see in a second-round match. I know that final was a tough three-set match. She never gives up. Like she’s just always fighting to come back.

He’ll face Gilles Simon next. Raonic on Simon:”I know a lot about his game. I’ve watched him play a lot. I’ve played him in quite a few important matches.

“He’s going to be there really trying to get me to play at his speed, his rhythm. Obviously he tries to slow things down, play low. I won’t have the opportunity to get too many swings at many shots.

Third seed Agnieszka Radwanska became the highest seeded woman to become an upset victim when she fell to No. 79 Mirjana Lucic-Baroni 6-3, 6-2.

Mirjana #LucicBaroni has that winning #AusOpen feeling in 2R pic.twitter.com/i3WQOQLBTS

U.S. Open finalist and Australian Open fifth seed Karolina Pliskova destroyed qualifier Anna Blinkova6-2, 6-0 in the second round on Thursday to reach her third straight third round in Melbourne.

“I’m feeling pretty good on the court, confident,” said the Czech. “I have some matches already what I won this year. I didn’t lose yet, which is also good thing.

“Yeah, I think I’m playing good. Even the opponents were not that high level, I would say, but still, I felt pretty good out there. Third round is going to definitely more tough than the first two. Also people are talking I have a good chance to win a Grand Slam, but we are just in third round, so let’s see.”

Pliskova will play Jelena Ostapenko, who dominated No. 31 Yulia Putintseva 6-3, 6-1.
Ninth seed and last year’s semifinalist, Johanna Konta, moved into the third round with a 6-4, 6-2 win over Naomi Osaka.

“I really — yeah, I think rarely do we get any easy rounds. That’s a given.

“She plays really well” Wozniacki said of her upcoming match against her British opponent. “You know, big forehand, big serve. But I’m ready. I’m playing well. I’m excited for the challenge.
“She’s obviously won last week in Sydney. She had a good last year. I’m here to fight. I’m here to do my best, and try and win the match.”

“At the end of the day, doesn’t matter who is on the other side. I’m going to try and win. If you want to win the tournament, you need to beat great players along the way. Whether it’s in the third round or the semis, whatever it is, you need to get through them.”

2014 finalist Dominika Cibulkova, seeded sixth held off off Hsieh Su-wei 6-4, 7-6 (8). She’ll face off against No. 30 Ekaterina Makarova, who won when Sara Errani retire in the second set due to a leg injury.

Other women’s seeds advancing to the round of 32 include: No. 12 Timea Bacsinszky, No. 14 Elena Vesnina, No. 16 Barbora Strycova, No. 21 Caroline Garcia and No. 22 Daria Gavrilova.