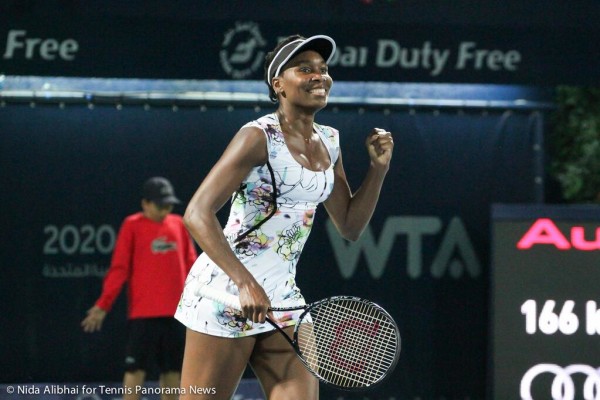 (January 23, 2017) Seven-time major winner Venus Williams has become the oldest woman to reach the Australian Open semifinals in the Open era. The 36-year-old veteran defeated 24th seeded Anastasia Pavlyuchenkova 6-4, 7-6(3) to reach the semifinals in Melbourne for the first time since 2003. Venus lost to sister Serena in the 2003 final.

The 13th seed has reached the final four in two out of the last three majors.

“It’s wonderful to be here – but I want to go further,” Williams said on-court after the match.

“I’m just so excited that I have an opportunity to play again.” @Venuseswilliams #AusOpen #Venus pic.twitter.com/nlmCO654vQ

“To me, the semifinals is a steppingstone, just like the other rounds,” Williams said in her news conference. “It’s an opportunity to advance. The tournament is by no means over. It’s definitely down to the business end.

“I feel like I’m playing the kind of tennis I want to produce the results that I want.”

Vandeweghe upset No. 1 seed Angelique Kerber in the round of 16 on Sunday.
“I really wasn’t feeling all that great out there, funny enough,” Vandeweghe said after the match in an on-court. “I even told my coach out there, I was like, man, better get some toilet paper out there because, you know.”

“Once I got rolling in the second it was light a freight train, you couldn’t stop it.”

The world No. 35 will play Venus Williams in the semifinals. Williams has a 1-0 record against her countrywoman.

“Last and first time I ever played Venus was on clay so I hope it will be a totally different match,” Vandeweghe said. Williams defeated Vandeweghe at the French Open.

“It’s a great win for the U.S., Williams said about having two American’s in the semifinals. “To have that thought that there’s going to be at least one U.S. player in the final is great for American tennis.

Asked if she could win the tournament, Williams said:”Why shouldn’t I? I try to believe. Should I look across the net and believe the person across the net deserves it more? This mentality is not how champions are made. I’d like to be a champion, in particular this year. The mentality I walk on court with is: I deserve this.”

“It’s amazing to be in a semifinal,” said Vandeweghe.”But, you know, not satisfying. I want to keep going, keep playing. There’s more things to do out on a tennis court that I’m hoping to achieve.

Welcome back to the semifinals, @Venuseswilliams.