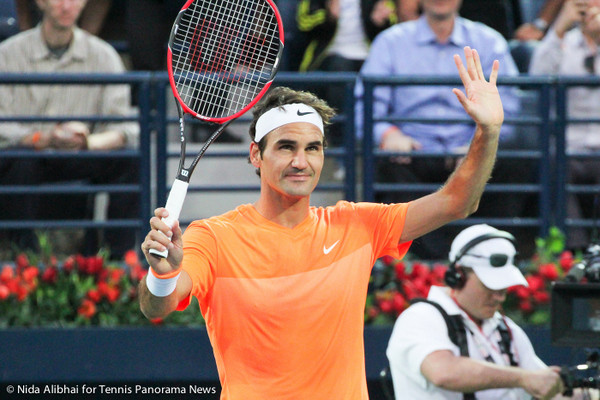 (January 24, 2017) It will be an all-Swiss semifinal in the men’s draw at the Australian Open, as No. 17 seed, the 17-time major champion Roger Federer and No. 3 seed Stan Wawrinka advanced with straight sets.
Federer, back from being sidelined six months due to a knee injury, beat 50th ranked Mischa Zverev 6-1, 7-5, 6-2. Zverev upset Andy Murray, the top seed in the round of 16. This will be the Swiss’ 13 semifinal in Australian and his 41st at a major.

Federer moved out to a 5-0 lead to open the match.

“I’m pleased with the way I started the match,” Federer said. “Right away again got off to a great start against him, like I did against him a few years ago. After that, naturally everything’s easier.

“Second set was definitely a key to shut it down for him. It was good that I was able to break back after he played a good game there.

“Yeah, then in the third set I think I was rolling.

“It was a nice match. I think I played great. Mischa had a wonderful tournament, so well done to him.”
Federer said that he came into the tournament just hoping to make a few rounds.

“I think now that I’m in the semis, feeling as good as I am, playing as good as I am, that’s a huge surprise to me. Like I said on court, if someone would have told me I’d play in the semis against Stan, never would I have called that one for me. For Stan, yes, but not for me. I honestly didn’t even know a few days ago that he was in my section of the draw or I’m in his section.

“I figured it out eventually that he was playing on my days, but I never really looked in that quarter of the draw because that was just too unrealistic for me.”

As to playing Roger Federer: “Yeah, it’s going to be a great match, for sure. Last time I think I got killed in US Open. He was playing way better than me, moving really well, really aggressive from the court.

“It’s going to be interesting match. He’s playing so well since the beginning of the tournament. He had a little bit some hesitation in the two first rounds, but since that he’s really flying on the court.

“It’s great to see him back at that level. Hopefully I can manage to play a great match.”

“I’m more confident with myself,” Wawrinka said in terms of playing Federer these days. “When I step on the court, doesn’t matter who I play, I know what I have to do if I want to win.

“For sure, against Roger, it’s always special because he’s so good. He’s the best player of all time. He has answer for everything. But I managed to beat him in a Grand Slam, so we’ll see.

“Most important is that I step on the court and I play my best tennis.”

Federer holds an 18-3 record against Wawrinka.