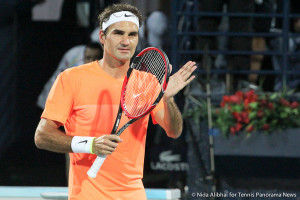 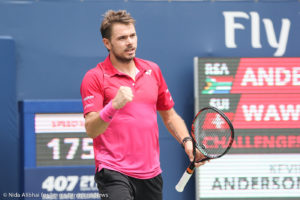 A 22nd career meeting between the pair.

This is their 7th Grand Slam meeting, but only their 2nd at the Australian Open and their 2nd in a Grand Slam semifinal. Federer has a 5-1 win-loss record against Wawrinka at the majors, with his only Grand Slam loss to Wawrinka coming in the quarterfinals at 2015 Roland Garros.

Federer has a 13-0 win-loss record against Wawrinka on hard courts. Wawrinka has won just 4 sets against Federer on a hard court in their 13 meetings on the surface, winning the opening set in their encounters at 2010 Stockholm, 2012 Shanghai-1000, 2013 Indian Wells-1000 and at the 2014 ATP World Tour Finals.

This is just the 3rd all-Swiss clash in Australian Open history – as well as Federer and Wawrinka’s quarterfinal meeting here in 2011, Marc Rosset defeated Jakob Hlasek in the 2nd round here in 1994.

This is the 21st time in the Open Era that players from the same nation have faced each other in the men’s singles semifinals at the Australian Open. It has happened just twice here in the last 16 years – in 2001 when Arnaud Clement came from 0-2 down to defeat Sebastien Grosjean and in 2009, when Nadal defeated fellow Spaniard Fernando Verdasco in 5 sets.

If Nadal defeated Milos Raonic on Wednesday evening, Wawrinka and Federer are 2 of the 3 players aged 30 or over to reach the semifinals here from the 46 who started the men’s main draw – equalling the Open Era record for the most 30-somethings to reach the semifinals at a Grand Slam set at 1968 Roland Garros. [NB written prior to Nadal’s quarterfinal with Raonic].

Wawrinka and Federer are also 2 of the 3 players with one-handed backhands to reach the semifinals here (alongside Grigor Dimitrov) – the most at a Grand Slam since the 2007 Australian Open, when Federer, Fernando Gonzalez and Tommy Haas all reached the last 4.

Wawrinka has not lost to a player ranked as low as No. 17 Federer at the Australian Open since falling to No. 21 Tomas Berdych in the 3rd round in 2009.

Federer and Wawrinka helped Switzerland win the Davis Cup title for the first time in its history in 2014. They also won the doubles gold medal together at the 2008 Beijing Olympics.

[Written prior to the Nadal v Raonic quarterfinal on Wednesday night]