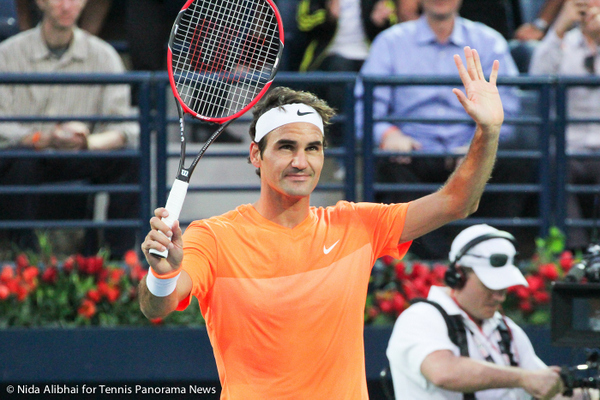 At 35-years old, the 17-time major winner has become the oldest man to reach a major final since 39-year-old Ken Rosewall did it at the 1974 U.S. Open.

Federer will be going for his 18th major title on Sunday against the winner of the Rafael Nadal – Grigor Dimitrov semifinal which will be played on Friday night.

Federer’s last major championship came when he captured the 2012 Wimbledon title. Since then his countryman, Wawrinka has won three major titles – 2014 Australian Open, 2015 French Open and the 2016 U.S. Open.

Federer injured his knee after last year’s Australian Open, had surgery and returned to the tour. After Federer lost in the semifinals of Wimbledon, he called it quits for the season to rehabilitate his knee. This is his first major since his layoff.

Federer won the first two sets and looked to have the momentum all in his favor.

Warwinka’s frustration showed when in the second set when he broke his racquet over his knee.

At the end of the second set, Wawrinka took a medical time out to get tape under his right knee. After the first couple of games in the third set, the 31-year-old came back with a new determination which saw him dominate the next two sets.

After the fourth set Federer took a medical time out for a leg injury. 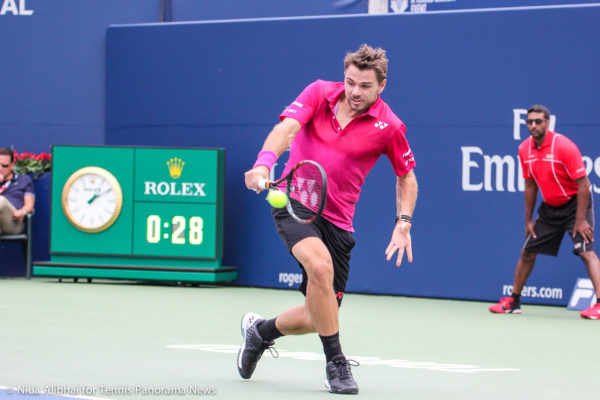 Each man saved multiple break points in the early part of the fifth set, but Federer converted in the sixth game and held the rest of the way to close out the match.

“I felt like everything happened so quickly,” Federer said after the match. “It feels amazing. I never, ever in my wildest dreams thought I was going to be coming this far here in Australia. It’s beautiful.”

“In the fifth, I just knew I had to find my energy again,” Federer said. Play with intensity, play more aggressive, take the ball early, believe in myself, serve good, try not to get in too many tough moments early on, which then I did.

“It was an awkward match. Always against Stan, it was always never going to be easy. Especially how the third and fourth set went by, I needed to react really, because he had the upper hand from the baseline.

“I thought it was going to be tough in the fifth. I think he gave me a cheap break in the fifth. After that, I never looked back.

“I’m happy with my attitude in the fifth. So I’m very pleased, of course.”

“I cannot just be happy to win two sets against Roger,” Wawrinka said. “I just lost a five-set match in semifinal of Australian Open.
“I never think about the past or what I did before. I’m proud of myself, of the fight I give tonight and all the tournament. I think there is a lot of positive from this tournament, from Brisbane, from the month already.

“For sure I’m really sad and disappointed with a loss like that because to be that close to have won a semifinal, it can be only sad.
“But at the end I know I tried everything on the court. I came from two sets down. I change completely the momentum. I start to be extra aggressive because I had to change few things also physically. So I change my game with that.

“At the end I had a great battle against Roger. He’s great fighter. He’s always been amazing in Grand Slam, in five-set match. I’m for sure sad to lose a match like that.

“But, yeah, I know there is a lot of positive.”

Federer on possibly playing Dimitrov in the final: “If going in, he’s easier because I don’t think I’ve ever lost to him. There you have it. But that doesn’t buy me anything. That doesn’t give me the trophy.

“I think he’s playing totally different now to how he was playing 12 months ago when I beat him in Brisbane and here back-to-back. I think he’s got the confidence. Like I said, you never want to play a guy with confidence because he believes he can rip trees out, you feel like Superman for a second. Rightfully so, he worked super hard. He probably believes he’s worked harder than anybody right now.

“I think he has a legit shot against Rafa. If he won that, then clearly also against me. I think he’s doing a nice job with his game right now. He’s cleaned it up nicely. He came from a tough place.

“I’ve given him some advice, too, because he came to me last year at some point. He was having all sorts of issues. We were just having a simple conversation. I’m happy he took some things onboard. He seemed to turn it around somehow. I’m really happy for him.

“Now if the match were to come up, I know I have to play a good match because he does present different things. He brings different things to the table because of the way he plays. Not many guys can do what he can do. He might be similar to me, but I was similar to Pete, too. I always told people, I’m not Pete Sampras. He’s not me. He is his own guy. He’s his own identity. Different character. Just because he played with Nike and Wilson like I did with Sampras doesn’t make us in any way the same. I think you got to give him that, please.”

“I just think he’s an incredible tennis player,” Federer said of Nadal. “He’s got shots that no other one has. When you have that, you are unique and special. Plus he’s got the grit. He’s got the mental and physical ability to sustain a super high level of play for years and for hours and for weeks. He’s proven that time and time again. He’s come back from many injuries, you know, time and time again. He made it seem easy, and it’s not.

“I think he’s been tremendous for the game. I have a lot of respect for him on many levels.”

“I’m in the finals, I know that. I know I will have a chance to win on Sunday now,” Federer said. “That’s a great position to be in. Regardless of who it’s going to be against, I think it’s going to be special either way. One is going to go for his first slam or it’s the epic battle with Rafa.

“All I care about is that I can win on Sunday. Doesn’t matter who’s across the net. But I understand the magnitude of the match against Nadal, no doubt about it.”