You are here: Home / Davis Cup/Fed Cup / U.S. Davis Captain Jim Courier on Tie Against Switzerland: “We don’t expect it to be easy” 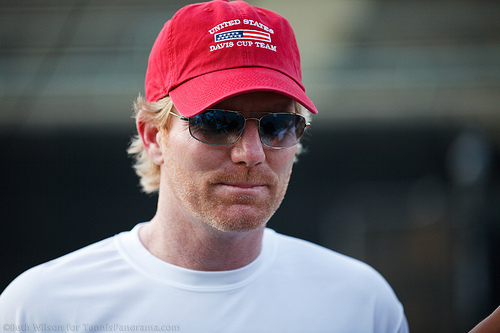 (January 31, 2017) The United States Davis Cup team will face off in the first round of World Group against Switzerland at the Legacy Arena at the Birmingham-Jefferson Convention Complex in Birmingham, Alabama.  The Swiss team will be without their top players – world No. 3 Stan Wawrinka and No. 10 Roger Federer, who won the Australian Open on Sunday for his 18th major.

Back on 2009, the U.S. also played Switzerland in Birmingham.

Both teams took part in pre-draw news conferences on Tuesday.

Playing Switzerland without their top two players, looks like an easy task for team USA this weekend, but USA Captain Jim Courier says there are no “gimmies.”

“Now, rankings don’t mean anything,” he said. “Once you get on the court, the ball doesn’t care what your ranking is. You have to hit the shots and win the points.

“We come in ready to play and ready to fight for every point. We don’t expect it to be easy.”

“We’re confident that we have four great players here ready to go to battle in five matches,” Courier continued.

Swiss Captain Severin Luthi acknowledged that this weekend won’t be an easy task without Wawrinka and Federer.

“We have the best players behind them here, he said. “We’re going to try to do our best and give 100%. We’ll also try to improve this week. All the rest really doesn’t matter for us.”

“I think one of our strengths is really that the players we have here, especially Marco and Henri, who played more matches already in Davis Cup, they’re always playing well. They give all the time 100%. They’re ready to fight. Yeah, they had good results in Davis Cup. I think that’s one of our big strengths.

“With Antoine, we have a rather young player who is playing the first time last year and helped us staying in the Group. With Adrien also we won the doubles there.

“Obviously we’re completely outsiders here, but as I said, we’re going to try our best and give 100%.”

“We were blessed to have Bob and Mike on our team for so many years,” Courier said. “They’re incredible. We’ll miss them for sure.

“I have a lot of confidence in these guys. Any combination of these four players would be a very, very good doubles team.

“It is different to not have Bob and Mike here. I wouldn’t say it’s better, but I would say that we feel comfortable that we have great options at our disposal for all of the matches.”

Swiss Captain Luthi was asked if the absence of the Bryan brothers was advantage to his team: “Honestly, I don’t think that it’s a big advantage because they have more flexibility like that for singles also. When they had the brothers in the team, you knew which players are going to play singles.

“Now, like I mentioned, I think all four players can also play doubles. They can change. They can wait and see how the matches on Friday went.

“I don’t think that it’s an advantage for us.”

The draw ceremony will take place on Thursday at the Birmingham Zoo at Noon.

For information on the tie from the USTA .

Friendly Fribourg; The Swiss City Did Itself Proud As a Davis Cup Host