You are here: Home / Davis Cup/Fed Cup / Sock to Lead Off for USA Against Switzerland in Davis Cup; Courier Reflects on Team USA’s Past and Future 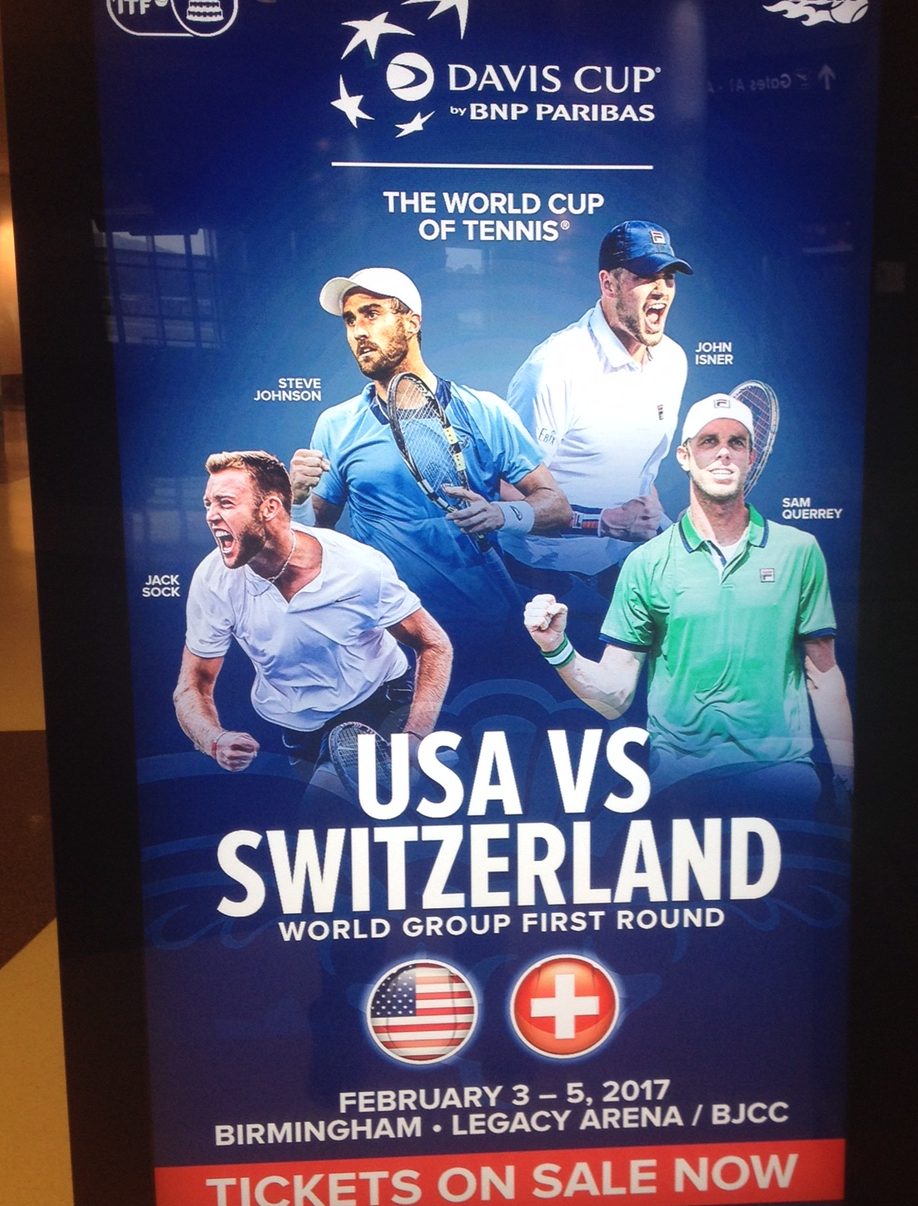 (February 2, 2017) In celebration of Groundhog Day, “Birmingham Bill” of the Birmingham Zoo picked the first match-up of the draw for the U.S. vs. Switzerland Davis Cup World Group First Round tie in Birmingham, Ala. on Thursday.

Day one will pit the No. 1 singles of their respective teams versus the No. 2 players on the other team.

American Jack Sock ranked No. 20 in the world will take on Marco Chiudinelli, ranked No. 46, followed by No. 23 John Isner against No. 127-ranked Henri Laaksonen. Sock is 3-2 in Davis Cup Singles play, while his opponent is 6-12. Isner beat Roger Federer when the U.S. shutout Switzerland 5-0 in the cup tie in Fribourg back in 2012.

Here is the lineup for the weekend tie:

*Team captains may substitute the doubles team up to one hour before the match.

December will mark ten years since the United States won Davis Cup. With the Bryan brothers retiring from Davis Cup play and former star Andy Roddick about to be inducted into the International Tennis Hall of Fame, the USA Captain reflected about the current team carrying American tennis forward since that group of players won the cup in Portland in 2007.

“First of all, we’ve been unbelievably lucky to have a great generation of Davis Cup players in Andy (Roddick) and James (Blake) and Mardy (Fish) and Bob and Mike Bryan that did great things for this country,” Courier said.

“They’ve passed that baton now off to these guys. It’s the turn and the privilege of these four players I’m sitting with right now to carry American tennis fans and the American flag for us.

“So it’s an exciting new time for us as a team. There’s no doubt that we’re indebted to the great service of Bob and Mike Bryan. I hope they continue to play great as long as they’re still on tour. We’ll miss them on this team, but I feel confident in the group we have assembled here and their capabilities both in singles and doubles.

“We have a lot of options at our disposal now, where you’re a little bit more limited when you go with two doubles players and two singles players from an injury standpoint.

“There are pluses and minuses. Fortunately we never got into a position with Bob and Mike where we had an injury issue that impacted us as a team. But we’re looking forward to what this year will bring. 2017, we’re excited to start at home. We need to get off to a good start obviously. We won’t take anything for granted. We’ll be ready to play, as I mentioned. But it’s a new page, a new chapter in the U.S. Davis Cup team. It starts right here, right now.”

As to the future of American men’s tennis, Courier sad: “You’re looking at the present and the future of it right here, for starters. The even better news is that we have a cluster of 18, 19 and 20-yearolds that are starting to make their way onto the tour, starting to get through the challengers, move up to tour level.

“I was lucky enough to come through a generation that pushed each other. We had a cluster back then. We were able to push each other to great heights.

“It can only benefit American tennis if we have this young group here. I know these guys are very proud of their positions that they’ve earned in the sport. They’re not going to let those youngsters come up and take them easily either. That will be fun, I think, to see everyone pushing in the same direction, to try to get a few more names on the sports pages for American tennis. That would be a good thing, for sure.

“But there’s a lot of work ahead of those youngsters, too. I’m fortunate enough to get a chance to see a lot of it down in Orlando at the new home of American tennis. A lot of them are training there. Jack has been there, as well, to check it out. We’re in the beginning stages of seeing some nice transition from juniors to professional tennis from a big group of players. That will be very fun to watch.”

Team USA holds a  3-1 record against the Swiss in Davis Cup play, with the the two countries’ last meeting in Birmingham, winning 4-1 win for the U.S. in the 2009 World Group First Round at the same venue – Legacy Arena.

U.S. Davis Captain Jim Courier on Tie Against Switzerland: &#8220;We don’t expect it to be easy”

Friendly Fribourg; The Swiss City Did Itself Proud As a Davis Cup Host