You are here: Home / Contributors / Davis Cup: Home Cookin’ in the Deep South; Sock, Isner Give U.S. 2-0 Lead Over Switzerland In First Round 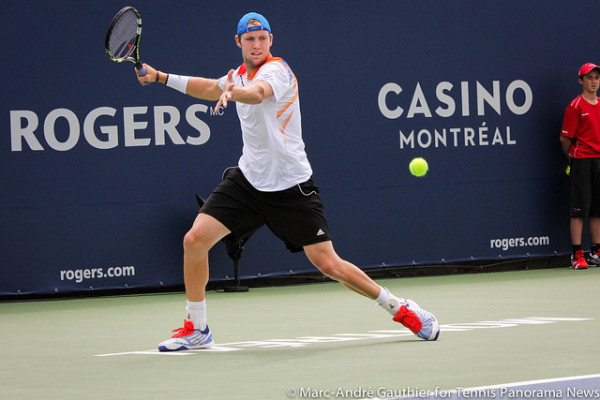 Sock, Isner Give U.S. 2-0 Lead Over Switzerland In First Round

(February 3, 2017) BIRMINGHAM, Alabama – The heavily favored United States team lived up to expectations as Jack Sock and John Isner won their respective singles rubbers against Switzerland, giving the Americans a 2-0 lead in the first round of Davis Cup Cup World Group competition at Legacy Arena at Birmingham-Jefferson Convention Complex.

Switzerland is playing this tie without its two top players – world No. 3 Stan Wawrinka and No. 10 Roger Federer who won the Australian Open last week.

In the first set, Isner’s powerful service game was blunted by Laaksonen executing solid returns and winning long rallies. Isner saved three break points to knot the set at 4-4, but the Swiss went on to win the set by breaking the world No. 23.

Isner committed 21 unforced errors during the set and backhanded numerous shots into the net.

The 31-year old Isner seemed to find his rhythm in the second set after breaking Laaksonen to go up 3-2, helped by a more effective service game — striking seven aces during the set and winning 84-percent of his first serve points. On the flip side, Laaksonen committed three double faults, including one that gave the U.S. a 5-2 advantage. Isner won the next game, closing it out with his 12th ace of the match.

The American got off to a fast start in the third set. He broke the Swiss in the first game with a winning forehand passing shot as Laaksonen approached the net. Isner held in the second game, but not before staving off three break points. In this set it was Laaksonen with 21 unforced errors helping Isner cruise through the remainder of the set.

The fourth set was a tight affair as both players battled. Isner was visibly frustrated by the 24-year old Laaksonen’s returns and defensive play. But when tiebreak time came around, it was all Isner. After a mini-break on the first point — followed by two service winners — victory came five points later when Laaksonen double faulted. During the on-court post-match interview, Isner admitted to being nervous at times during the match.

“I’ll take the film of that first set and just throw it in the fire, delete that one,” Isner said in his post-match news conference. “I think more than anything I was a little bit nervous, and that was affecting my footwork quite a lot. With me being so big and when my footed work is not sharp, it can be ugly. It was in the first set.”

Jim stayed on me to stay positive, even though I wasn’t feeling very positive out there. I think that’s actually what tilted the match in my favor a little bit. Certainly could have been cleaner, but Davis Cup you ties throw out rankings and whatnot, it’s tough touch out there in these matches, so I’m happy to get the win.

In the first rubber, it took just under two hours for No. 1 American Jack Sock to defeat Marco Chiudinelli — ranked 146 in the world — 6-4, 6-3, 6-1. Things were pretty even until Sock won the first set by breaking Chiudinelli with an overhead lob that was retrieved but hit just wide of the sideline.

“There are always few extra nerves I think playing Davis Cup,” Sock said. “When you’re playing for your country, being a part of a team, maybe at a normal event, normal tournament, you come out swinging a little bit more.

“I think I was a little hesitant at the beginning; maybe too conservative playing when obviously my game is to kind of play big and hit big forehands and be aggressive.”

Sock continued to put pressure on the 35-year old Swiss by stepping up his aggressive play, with solid ground strokes and serves with some net play in the mix. For the match, Sock had 29 total winners to Chiudinelli’s eleven. The Nebraska-born 24-year old was never broken in four attempts.

The U.S. can clinch the tie by winning Saturday’s doubles match-up — scheduled to be Sam Querrey and Steve Johnson versus Switzerland’s Antoine Bellier and Adrien Bossel. Bellier’s heroics kept the Swiss in the top tier of Davis Cup, courtesy of his 2016 World Group play-off win in the deciding rubber against Uzbekistan back in September.

Team USA is not taking anything for granted. They had a 2-0 lead back in July and lost in the quarterfinals to Croatia. 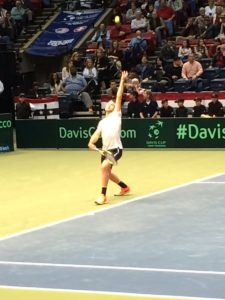 “I think as a whole, as a team, like I said, we’re not taking anyone lightly,” Sock noted. “But at the same time, we’re confident in our squad and our four guys in the matchups this weekend.

“We’re going to go one match at time and get one point at time.”

A victory would earn the Americans a quarterfinal trip to Australia — a rematch of last year’s first round tie won by the U.S. at Kooyong. Australia clinched their tie against the Czech Republic with a doubles win to give them a 3-0 lead.

500 aces while representing #TeamUSATennis at #DavisCup. Congrats @JohnIsner on the milestone at the R1 tie in Birmingham! Cc @DavisCup pic.twitter.com/QYX1OTr8e3

John Isner notched his 500th Davis Cup ace during the fourth set of his match against Henri Laaksonen.

Isner was not aware of this upcoming milestone: “I was wondering, because I heard them say 500. I was wondering what that was. Thank you for clarifying that. I had no idea I was close to that in Davis Cup play.

“You know, I’ve been fortunate enough to be able to play in a lot of singles matches on the Davis Cup team. I guess that’s a pretty cool number to achieve.

“More than anything, I’m just happy I was able to get the win today. I thought the crowd was great, and we’re up 2-0. We’re in a pretty good spot.”

“But Davis Cup anything can happen. You see it every year. Every tie almost you see some kind of crazy things happen.”

Unusual for a Davis Cup tie in the U.S. to have a serve speed clock deliver results in kilometers per hour instead of miles per hour. Fans in the stands were trying to guess the actual MPH.

Junior Williams is a long-time journalist and tennis fan. At a moment’s notice, he can give you a list of all the Davis Cup match-ups that would give the USA home ties. He is in Birmingham, Alabama covering the Davis Cup first round World Group tie between the United States and Switzerland for Tennis Panorama News.