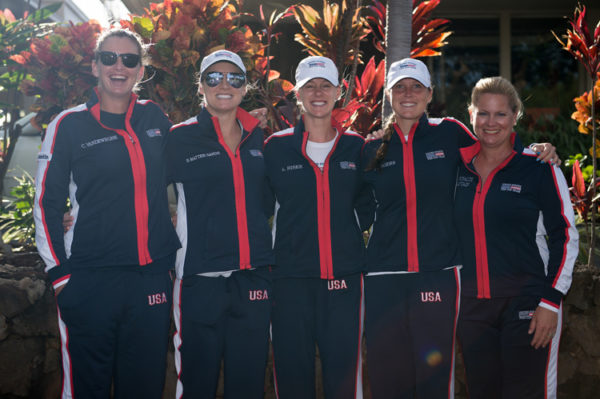 (February 10, 2017) The United States takes on Germany in the first round of World Group this weekend in Maui. Day one’s schedule includes two singles matches featuring each country’s No. 1 player against the other country’s No. 2 player. Sunday’s schedule features two “reverse singles” matches, where the No. 1 players square off and then the No. 2 players meet, followed by the doubles match.

The Royal Lahaina Resort hosts the tie which will lead off with world No. 40 Alison Riske taking on world No. 51 Andrea Petkovic.

Riske is playing in her first Fed Cup tie since 2015 and is competing in her second Fed Cup singles match, holding an 0-1 record. Riske peaked at a career-high No. 38 in the world this January after a strong start to 2017, highlighted by reaching her fifth career WTA singles final in Shenzhen and advancing to the third round of the Australian Open. Petkovic is competing in her 14th Fed Cup tie and holds a 12-6 Fed Cup singles record. She peaked at No. 9 in the world in October 2011 when she reached the quarterfinals of three different Grand Slams (Australian Open, French Open, and the US Open). She also advanced to the semifinals of the 2014 French Open. Riske and Petkovic have never faced each other in WTA competition.

The second match-up on Saturday will feature the United States’ top player Coco Vandeweghe against German Julia Goerges. Vandeweghe and Goerges have met three times on the WTA Tour, with Goerges holding a 2-1 record over Vandeweghe. Goerges won the last two meetings at the 2015 French Open (in three sets) and in Brussels in 2013. Vandeweghe defeated Goerges in Tokyo in 2010. Vandeweghe is ranked a career-high No. 20 in the world after advancing to the semifinals of the 2017 Australian Open—her career-best Grand Slam result. In Australia, she upset three seeded players, including then-world No. 1 Angelique Kerber, before falling to Venus Williams in the semifinals. Vandeweghe has played in four Fed Cup ties for the U.S., holding a 1-3 record in singles and a 3-0 record in doubles. Goerges is ranked No. 57 in the world and peaked at a career-high No. 15 in the world in April 2012. She holds two WTA titles and advanced to four additional finals. She is playing in her 14th Fed Cup tie and holds a 4-6 singles record in Fed Cup play.

Kathy Rinaldi will be making her debut as Fed Cup Captain in this match-up.Rinaldi was named the 19th U.S. Fed Cup Captain on December 8, succeeding Mary Joe Fernandez after eight years at the post. Rinaldi currently serves as Lead National Coach, Team USA – Pro Women for USTA Player Development, focused on helping American pros achieve Top-100 rankings. She has coached the U.S. to multiple junior international team competition titles and coached the U.S. women in the Pan-American Games in 2015. Rinaldi, 49, was ranked as high as No. 7 in the world in singles (May 1986) and No. 13 in the world in doubles (February 1993).