You are here: Home / Features / U.S. Leads Germany 1-0 in Fed Cup After Outdated Stanza of German Anthem Sung as Day One is Shortened by Rain

(February 11, 2017) During the opening ceremonies of day one of the Fed Cup quarterfinal tie between the United States and Germany on Saturday in Maui, Hawaii, a World War II era stanza of the German National anthem was sung.

The United States Tennis Association (USTA) issued an apology for the error in a statement:

“The USTA extends its sincerest apologies to the German Fed Cup team and all of its fans for the performance of an outdated national anthem prior to today’s Fed Cup competition,” the release said. “In no way did we mean any disrespect. This mistake will not occur again, and the correct anthem will be performed for the remainder of this first-round tie.”

The USTA extends a sincere apology to the German Fed Cup team & fans 4 the outdated National Anthem. This mistake will not occur again. pic.twitter.com/4LyG3ACe5u

Germany’s Andrea Petkovic, who lost in the only completed match on Saturday was very upset about the anthem.

“I thought it was the epitome of ignorance, and I never felt more disrespected in my whole life,” she said. “I’ve played Fed Cup for 13 years now, and it was the worst thing that has ever happened to me.”

Alison Riske, who defeated Petkovic 7-6(10), 6-2 also commented: “You know what, as it was happening obviously, we have no idea. News got around to us, and it’s extremely unfortunate. We have nothing but respect for the German team.”

“Obviously, that will not happen again.” 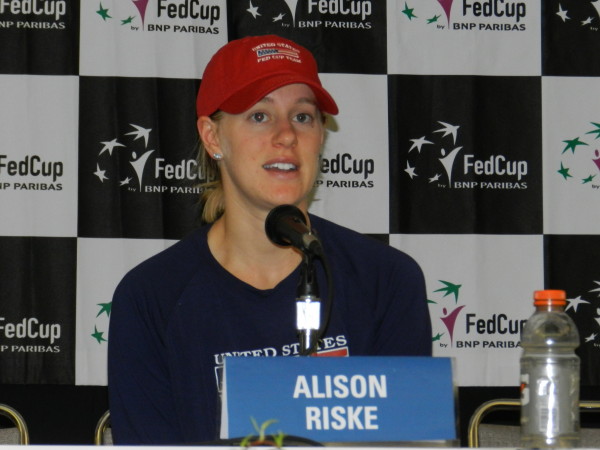 For Riske, this was her first singles victory in Fed Cup.

“It mean(s) a lot when you play for your country. I’m always emotional when I talk about America. We’re lucky to be living here and to represent America. Any time we can, it’s a real honor.”

Petkovic was serving for the first set at 5-3, when Riske came back to force a tiebreak. At 3-3 in the tiebreak, play was suspended due to rain.

“Just tried to get out there after the rain break and go after it. Yeah, I did have four set points to win it. After that, I felt like I was in a better place mentally just to have one set under my belt.”

“I was fighting a lot of nerves,” she said after the match.” Like I said, we all want to win for our country, our team, our captain.”

“Considering all the conditions, it was a good quality match in the first set,” said the former top 10 Petkovic.” I just didn’t close it out. Yeah, maybe a little unlucky in few moments; maybe a little also few mistakes that shouldn’t have happened in the important moments.

“Then, as I said, she played fantastic second set.”

Coco Vandeweghe took a 6-3, 3-1 lead over Julia Goerges before rain halted play for the day.

The United States leads Germany 1-0 after the first day of play. They will resume play at 9:30 AM local time. Vandeweghe-Goerges will be completed, followed by reverse singles – Riske against Goerges,  Vandeweghe takes on Petkovic, and then the doubles match- Bethanie Mattek-Sands and Vandeweghe versus Laura Siegemumd and Carina Witthoeft.