You are here: Home / Features / Former Champ Wozniacki and Gold Medalist Puig Advance, While Vandeweghe Loses To Riske in Dubai 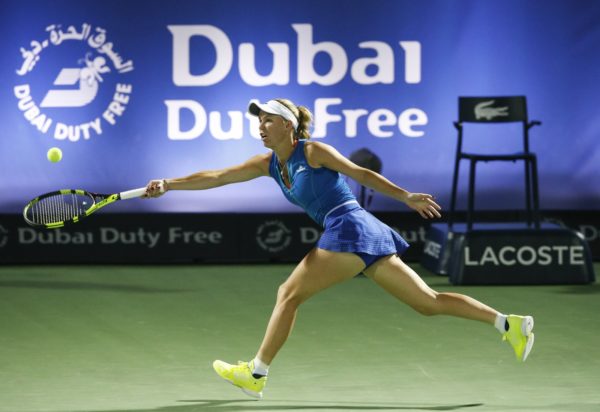 “Well, obviously seeing the draw, it’s like, well, could have had an easier first round,” said Wozniacki, who won the title in 2011 and has reached the semifinals in her last four apperances in Dubai. “She’s a good young player. She mixes up the pace a lot. She kind of tries to bring you out of your rhythm and she has great hands. I was really pleased with how I was able to just stay focused out there from the beginning. I didn’t really know how I was going to play to start off with. Generally, I was pleased with my game.”

Olympic gold medalist Monica Puig who is nursing a sore back, beat Yaroslava Shvedova 6-3, 4-6, 6-4. Puig had a medical time out after the second set.

“It’s just some lower back soreness,” Puig said. “I came from Doha two days ago, so the balls are a bit different. The court is definitely much different than in Doha. It’s just something that I have to go and get treatment with, but it’s really no big deal.”

“There are so many top players competing on Tuesday that not all can be scheduled on Centre Court,” said tournament director Salah Tahlak. “That means spectators will be able to see stars such as Caroline Wozniacki, Olympic gold medal winner Monica Puig and Tunisian qualifier Ons Jabeur free of charge on the outside courts. As an added bonus, they will also be able to catch one of the greatest players of all time, Martina Hingis, in doubles action.”