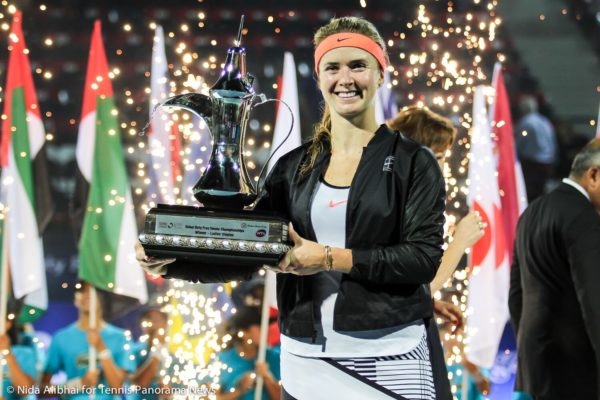 (February 25, 2017) DUBAI – Elina Svitolina won the Dubai Duty Free Tennis Championships title with 6-4 6-2 win over former No. 1 Caroline Wozniacki. This is the biggest title in the Ukrainian’s career, which will place her in the top ten on the WTA Tour when next rankings come out on Monday. She’ll be the first woman from her country to ever reach the top ten since the rankings were introduced in 1975. This is her sixth career title.

This was Svitolina’s second title in a month, who also won in Taipei, and a second final in two weeks for Wozniacki after she also finished as runner-up in Doha.

“I’ve dreamed for all my life to be in the Top 10,” said the 22-year-old Svitolina. “It’s a very amazing feeling and to do it by winning the tournament – I’m very excited for the season and very excited I could win this tournament.”

“She gets a lot of balls back. She mixed up the pace well. She did what she had to do today,” said Wozniacki. “I think I started off really well. I feel like I was inside the court a lot. You know, I was dictating and playing well. Then I kind of felt like I ran out of steam a little bit and she took advantage of that. She stepped it up a little bit.  She played really well, got a lot of balls back. She mixed up the pace when she needed to. She was serving better than me today. I really tried hard. Obviously it’s frustrating when you see what you want to do out there and you just can’t do it. You know, that’s the most frustrating feeling. I feel like if I had gotten, you know, maybe to 5-All or, you know, gotten a little bit closer in that first set, it could have been different.”