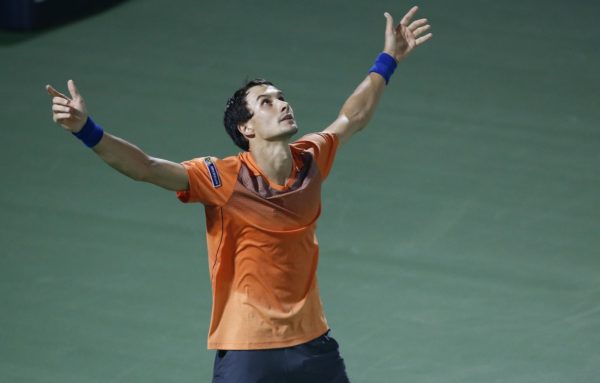 (March 1, 2017) DUBAI, UAE:  Seven-time champion Roger Federer lost to 116th– ranked  qualifier Evgeny Donskoy 3-6, 7-6(7), 7-6 (5) on Wednesday. It is his earliest defeat in the Dubai Duty Free Tennis Championships since he was beaten by Andy Murray in the first round in 2008. It is also only the third time since 2007 that he has lost to a qualifier. Federer led 5-2 in the final set and lost four straight games. Federer led 5-1 in the third set tiebreak and lost the next six straight points.

“Maybe it wasn’t really committed enough, I think,” said Federer. “Commitment in tennis is a big thing. In the first round I was. Today I wasn’t, really. That sort of is a feeling you get and it trickles in an entire game. I thought I returned way better in the first round. Today I really struggled on the return. I didn’t quite really time it well. Yeah, timing I thought was off for me today. Legs also felt slower out here tonight. I felt tired all day. I tried to get myself in shape, and, you know, like warm up properly, do all the things I always do, regardless if it’s a first round or a final.

“There’s no excuses there. I just think it’s still the beginning of the comeback and gotta take the positives out of, you know, playing again a tournament where I feel I’m quite healthy and I’m happy I got over the (groin) injury I sustained at the Australian Open. Maybe didn’t allow me to practice as much as I was hoping to in Switzerland, but at the same time also needed the rest. (But) there was also no problem there, really. I came early. I was perfectly prepared. It’s just a tough loss tonight. So many chances. It was crazy.”

Donskoy revealed that with his coach absent this week he is being helped by former two-time Dubai finalist Mikhail Youzhny, and said, “It was really tough in the beginning, because it was too much pressure. I mean, I felt it on myself, because it’s Roger, and I never even practice with him. So it was tough. And that many people. I’m used to playing on centre court and many people, but Roger is different moment. And then, like, when you winning some games then you start to think, like, okay. I was saying to myself, like, do your legs lower, because if I stand up I getting so much mistake. That’s what I said to myself.”

“When I got the early break, pretty much was almost 30 minutes in and we’d only played four games. Mentally, that was important for me, you know, to be up at that stage,” said Murray. “It could have gone either way, obviously, first few games. But being up at that stage helped, and then I loosened up a bit after that and played really well.

“It was way better than how I played at the beginning of the year, that’s for sure. You know, playing aggressive, feeling more solid, and when I’m in position to dictate the points I’m doing it, moving forward. I hit my forehand very well last couple of matches. I served better today. It’s been a good start. Obviously matches will get tougher, but I’m much happier with how I’m playing.”

Fourth seed Gael Monfils was also stretched by Daniel Evans but won 6-4, 3-6, 6-1, and recent Marseille finalist and number seven seed Lucas Pouille eased past qualifier Marius Copil 6-1, 6-4. Damir Dzumhur followed up his defeat of defending champion Stan Wawrinka by beating Marcel Granollers, recovering from 1-4 in the second set to take the next five games and claim a 6-3, 6-4 victory, and Philipp Kohlschreiber earned a single break in each set to defeat Daniil Medvedev 6-4, 6-4.