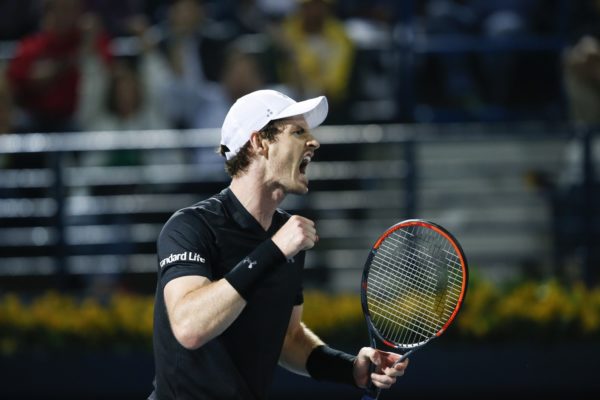 (March 2, 2017) DUBAI, UAE:  Andy Murray saved seven match points to advance to the semifinals of the Dubai Duty Free Tennis Championships over Philipp Kohlschreiber 6-7 (4), 7-6 (18), 6-1 in just under three hours. The 31-minute second set tiebreak saw he world No. 1 fight off off seven match points before finally levelling the match on his eighth set point. In the deciding set, Murray held off a break point at 1-1 but then took control. He admitted that he had never won a match after saving so many match points.

“Never,” he said. “And I have never played a tiebreak that long ever. Not in juniors, nothing even close to that, I don’t think. Yeah, obviously a long, long tiebreak. And I’ll probably never play another one like that again. I have been playing on the tour for 11, 12 years now, and nothing’s been close to that. There was definitely some unbelievable points in that second-set tiebreak. Obviously we both missed a couple of shots, but in general I think the level was extremely high. He was hitting the ball so hard tonight, I mean, from both sides. Any time he had the opportunity he was ripping the ball and made it really, really tough.

“They can be very important matches to get through, ones like that. I could have obviously easily lost tonight, but, you know, the way that I played when I was behind will give me a lot of confidence. It was a tough start to the year, and to get through a match like that against a guy who I think played very, very well, I really had to earn it. It was big for me. I want to try and keep that going now.”

Kohlschreiber found positives despite his defeat, saying, “Of course losing is always disappointing, but I’m not sad. I think I played great tennis, one of my best matches. Okay, the result is sad, but the way I played, the way I enjoyed myself on the court, nothing to be sad about. I think we both played almost the best tennis we can play, I guess. I think it was a very great match. Well-deserved, he’s a great fighter, he never gave up.”

“I think I played almost perfect match,” said Verdasco. “I mean, maybe I could be a little bit more aggressive on my serve, but of course if I look more for an aggressive serve, my percentage will go down and play with second serves, and I think against him, playing with second serves, I will be like defending on many points. You know, very happy, I think, like really complete match, in general.”

Dzumhur made too many unforced errors in the first set, but he steadied in the second and Haase felt he failed to maintain his standards of the opening set.

“He made less errors, but also I played less deep and less aggressive. I think it’s always a combination of the two,” said Haase. “He’s known for not giving you anything, so I knew it was going to be a tough match.”