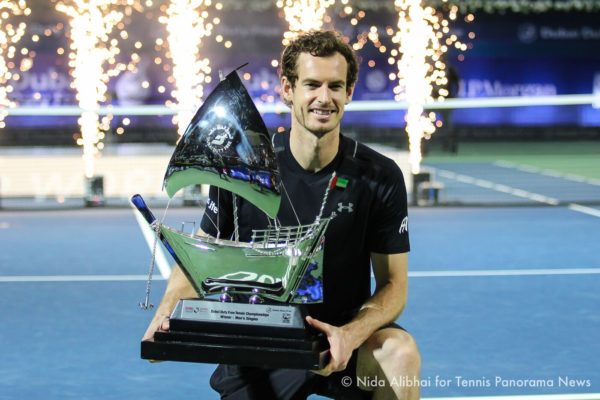 The Scot, Murray battled back from 1-3 down in the first set.

“It’s nice to win and I played much better as the match went on,” said the world’s top player. I started a little bit slow, but I was solid. I wasn’t afraid to attack his forehand side. He’s got one of the best forehands, but I tried to move him around the court as much as I could.

“I defended pretty well and moved well. I served a lot better as the match went on. It was obviously good to win the first tournament here.”

“I think that obviously I had, if not the toughest opponent I can have in the final, then one of them, for sure,” noted the Spaniard. He’s No. 1 in the world right now. It was obviously a really difficult final to win, but I came trying everything and giving everything.

“I said that yesterday that being in the final of a 500 after five years is a great week for me and I have to take the positive things.”
“It was obviously a really difficult final to win, but I came trying everything and giving everything. Just, of course, he doesn’t put the things easy to you. He push you. And at the same time, I didn’t really feel as comfortable or hitting the ball as clean as days before. Also, he’s used to it, to play matches like this more than me. I think physically I was not that fresh. I felt that kind of like in the balls that I needed to stretch so much, or he opened the court so much. And obviously even when I had a little bit of advantage in the first set with the breaks up, I couldn’t really find my rhythm. Of course it’s disappointing. Even if he is number one in the world, I want to win.”

Murray became the fourth man this year to come back and win a tournament after saving match point. Murray saved match points in his quarterfinal against Philipp Kohlschreiber.

Murray is now 19-0 in his last four 500-level tournaments entered having triumphed at London/Queen’s Club, Beijing, Vienna.
Fernando Verdasco will return to the top 30 in the rankings on Monday for the first time since April of 2015.

In the doubles, Jean-Julien Rojer and Horia Tecau lifted the champions trophy with a 4-6 6-3 10-3 win over Rohan Bopanna and Marcin Matkowski. It is their 13th title together, which includes both Wimbledon and the ATP World Tour Finals in 2015. It is Rojer’s 22nd doubles title and Tecau’s thirtieth. Bopanna was seeking his fourth Dubai title after winning in 2012, 2014 and 2015, all with different partners.