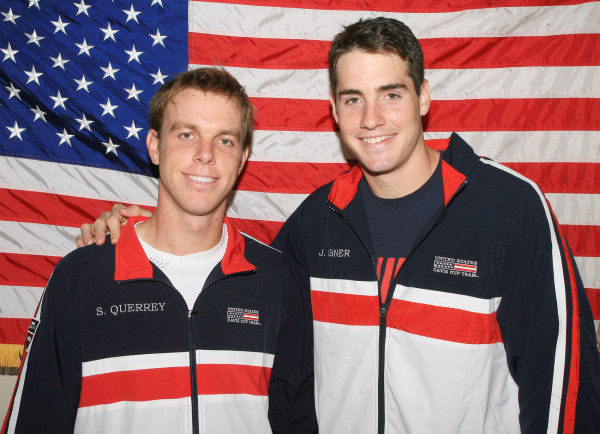 Matches to be held at the Pat Rafter Arena in Brisbane, Australia, April 7-9

WHITE PLAINS, N.Y., March 28, 2017 – The USTA and United States Davis Cup Captain Jim Courier today announced that world No. 17 Jack Sock, No. 23 John Isner, No. 27 Sam Querrey and No. 28 Steve Johnson will represent the U.S. in the 2017 Davis Cup by BNP Paribas World Group Quarterfinal against Australia. The best-of-five match series will be played on an outdoor hard court at the Pat Rafter Arena in Brisbane, Australia, April 7-9.

Australian Davis Cup Captain Lleyton Hewitt nominated No. 16 Nick Kyrgios, No. 79 Jordan Thompson, No. 188 Sam Groth and John Peers, who is ranked No. 3 in doubles, to his team.

This marks the second consecutive year the U.S. has played at Australia in Davis Cup. Nations normally alternate which country hosts the other with each tie. However, the Americans and Australians played consecutive ties in the U.S. in 1997 and 1999, when the ITF staged the latter tie at the Longwood Cricket Club in Chestnut Hills, Mass., the site of the first-ever Davis Cup tie, as a 100th anniversary celebration of the competition. As a result, the two countries agreed their next two ties would be in Australia.

The U.S. has faced Australia in Davis Cup play more times than any country, holding a 26-20 all-time record in a rivalry that dates back to 1905. The U.S. won the last meeting, 3-1, in Kooyong, Australia, in the 2016 World Group First Round, led by Sock, Isner, and Bob and Mike Bryan. Earlier this year, the U.S. swept Switzerland, 5-0, in the World Group First Round in Birmingham, Ala., while Australia beat the Czech Republic, 4-1, in Kooyong.

Friday will include two singles matches featuring each country’s No. 1 player against the other country’s No. 2 player. Saturday’s schedule features the pivotal doubles match. And the final day of play on Sunday features the two “reverse singles” matches, when the No. 1 players square off, followed by the No. 2 players meeting each other in the final match. All matches are best-of-five sets until one nation clinches the tie. A revised schedule for Sunday may take place if a team clinches in the third or fourth match.

The winner of this tie advances to the World Group Semifinals, Sept. 15-17, for a chance to vie for the 2017 Davis Cup title. The semifinal opponent will be either Belgium or Italy.

Sock, 24, is ranked a career-high No. 17 in the world after winning his second and third career ATP titles this year in Auckland and Delray Beach, Fla., respectively, then reaching the semifinals of the BNP Paribas Open ATP Masters 1000 event in Indian Wells, Calif. Sock has played Davis Cup since the 2015 and holds a 4-2 record in singles, including a win over Marin Cilic in last summer’s quarterfinal vs. Croatia, and a 1-0 record in doubles. Sock won his first ATP singles title in 2015 in Houston, and he has also reached four additional ATP finals (Stockholm, Houston and Auckland in 2016; Stockholm in 2015). Sock has also thrived in doubles, winning the 2014 Wimbledon doubles title with Vasek Pospisil and capturing the gold medal in mixed doubles at the Rio Olympics with Bethanie Mattek-Sands. In 2011, he won the US Open mixed doubles title with fellow American Melanie Oudin. Sock peaked at a career-high No. 6 in the individual doubles rankings in May 2015.

Isner, 31, is ranked No. 23 in the current world rankings and will be competing in his 14th Davis Cup tie; he is 12-10 in singles and 2-0 in doubles. Isner’s biggest Davis Cup victory came in 2012, when he defeated Roger Federer in the U.S. Davis Cup team’s first-round win at Switzerland. The tallest player in U.S. Davis Cup history at 6-foot-10, Isner made his Davis Cup debut in the 2010 World Group First Round in Serbia, where he became the first U.S. player since 2003 to compete in three live rubbers in the same tie. He also represented the U.S. at the 2012 London Olympics, reaching the quarterfinals before losing to Federer. He holds 10 career tour singles titles, the last of which came in Atlanta in 2015. In 2016, Isner reached the final in Atlanta and at the Masters 1000 event in Paris and reached the fourth round of the Australian Open and French Open. Isner turned pro after an outstanding four-year career at the University of Georgia, leading the Bulldogs to the 2007 NCAA team title as a senior.

Querrey, 29, is ranked No. 27 after winning his ninth career ATP title in Acapulco a month ago, a tournament in which he defeated four straight Top 20 players: No. 11 David Goffin, No. 9 Dominic Thiem, No. 17 Kyrgios and No. 6 Rafael Nadal. Querrey is competing in his second straight tie and his 11th overall after winning a dead singles match in February’s World Group First Round vs. Switzerland. He made his Davis Cup debut in 2008, where he faced Nadal in his first-ever match. Querrey holds a 7-8 record in Davis Cup singles play and is 1-0 in doubles. He also competed in the 2008 Olympic Games in Beijing. In 2016, Querrey advanced to the quarterfinals of Wimbledon, upsetting Novak Djokovic in the third round and becoming the first American to beat the No. 1 seed at a Grand Slam since 2002. In addition to his singles success, Querrey holds five ATP doubles titles, including two with Isner (Memphis in 2010 and Rome in 2011) and one with Johnson (Geneva in 2016). Querrey peaked at No. 17 in the world in January 2011.

Johnson, 27, is ranked No. 28 in the world. He is playing in his second consecutive Davis Cup tie and third overall, after clinching victory with Sock in doubles in February’s World Group First Round vs. Switzerland (he then won a dead singles rubber). Since then, Johnson has reached three straight ATP quarterfinals, most recently falling to Federer in two tiebreaks in the third round at Indian Wells. Johnson started 2017 strong by reaching the semifinals in Auckland, losing to Sock. In 2016, he won his first career ATP singles title in Birmingham, Great Britain. Also in 2016, he advanced to the fourth round of Wimbledon for the first time, the semifinals of the Citi Open in Washington D.C., and captured the bronze medal in men’s doubles at the Rio Olympics with Sock. Johnson, who peaked at No. 21 in the world in July 2016, turned pro in 2012 after an outstanding college tennis career at USC; he won the 2011 and 2012 NCAA singles championships and led the Trojans to team titles all four years he played for the school. Following the end of his collegiate career, he reached the third round of the 2012 US Open, becoming the first reigning NCAA champion to advance to the third round of the men’s singles since 1995.

Additionally, Courier announced that Connor Smith will be the practice partner for the U.S. Davis Cup team. Smith was also a practice partner for the U.S. Davis Cup team in Australia in 2016. Smith, 26, graduated from Ohio State in 2013 after transferring from Florida State following his sophomore season. He went 36-7 in singles and 33-7 in doubles during his senior year. Smith holds six USTA Pro Circuit/ITF Circuit singles titles and 14 doubles titles, including two doubles titles this year held at the new USTA National Campus at Lake Nona in Orlando, Fla. In 2016, he competed in Australian Open qualifying for the first time. Smith is ranked No. 329 in the world.