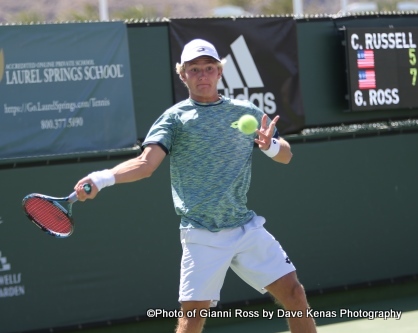 (March 28, 2017) INDIAN WELLS, Calif. – It’s been 45 years since there’s been a repeat winner in the Boys’ 18s division at the premier junior tennis tournament in the nation. At this week’s 50th Annual Adidas Easter USTA Junior National Spring Championships, Gianni Ross is attempting to be the first to win back-to-back 18s singles titles since 1971-72 when Grey King achieved the feat.

Ross had a wide grin on his face for a few hours after the victory on Tuesday. “This is a fun tournament for me,” he said. “I like everything: conditions, courts, balls. So I’m ready. It felt really dry for me today for some reason. I had to keep putting water on my hands. It was just so dry. Maybe because I was just coming from Carson. It was so gloomy and cold there to the hot and dry here.”

Ross played in the Carson International Spring Championships singles final on Sunday falling to Alexandre Rotsaert of Boca Raton, Fla., the No. 9 Easter Bowl ITF seed and another straight-set winner on Tuesday.

“I was depressed for a day, but you can’t ask for more than a final,” Ross said. “So I’m happy and I hope I can do just as well here.”

Ross was told there had only been one repeat boys’ 18s winner in the 50-year history of the tournament and was asked if he felt pressure. “No,” Ross said emphatically. “I shouldn’t feel pressure. There’s pressure to win every win match. So why should this week be any different.”

He said winning the Easter Bowl last year made his name a little more well-known. “Winning last year was great,” said Ross, who suffered an illness that kept him off the court during the summer. “If I could get back and do it twice, that would be amazing. It was important for my last year to win this last year.”

To go pro, or enter the collegiate ranks is the pressing question that looms for Ross. “It’s still right there, deciding whether to go to college or turn pro,” he said. “I don’t think about it day by day. I just wake up and play tennis and try to get better. And that’s about it.”

Redondo Beach’s Taylor Johnson has never won the Easter Bowl, but after her dominating 6-1, 6-0, first-round win over Chloe Hamlin of Bristol, Tenn., Johnson looks like a definite top contender to win this year’s title.

Like Ross, Johnson fell in the Carson ISC final Sunday to a player who is not entered in this week’s tournament, Carson Branstine.

“Reaching the final last week gave me a lot of confidence,” said the lefty Johnson, who is coached by tennis legend and Coachella Valley resident Rosie Casals. “Just working with Rosie these past four or five years has helped me so much. I like to serve and volley and she’s really helped me with that.”

“I hope it’s not as long as last week’s match but I’ll do whatever it takes to win,” Johnson said. “I was down in all three sets and faced a match point against her in the third set. It was tough, but I was able to pull through.”

Also posting a win in the first round in the Boys’ ITF singles was top-seeded Trent Bryde of Suwanee, Ga., who best Benjamin Gollin of Solana Beach, Calif., 6-1, 7-6 (4).

In addition to live streaming the Easter Bowl again this year, the tournament has a new and improved mobile app, which can be found in both the Apple iTunes store or at Google Play. Search “Easter Bowl” to download the app. The live stream commentating duties are being provided by the popular Southern California tennis commentator Marcus Tennis. Check www.easterbowl.com to watch the live stream and for all Easter Bowl news, results and schedules.