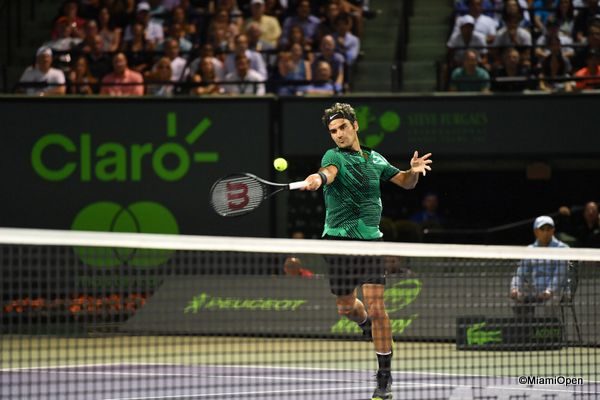 (April 2, 2017) To quote the Peter Allen song from the movie “All That Jazz” – “Everything Old is New Again, especially on the ATP World Tour with Roger Federer’s and Rafael Nadal’s resurgence. Both men took time off the tour part of last year to recover from injuries. Federer was out for last six months of 2016 with a knee injury. Nadal was sidelined with a wrist injury to end the year in October.

For Federer this is his 91st career title, 26th Masters Series 1000 championship, third overall behind Novak Djokovic and Rafael Nadal.

On Sunday, the long-time rivals and top two major title holders 35-year-old Federer (18) and 30-year-old Nadal (14) squared off for the 37th time, this time in the final of the Miami Open. For the third time this year, Federer bested Nadal 6-3, 6-4 to win his third Miami title. In the final for a fifth time, Nadal was denied the crown in Key Biscayne.

Federer won the tournament back in 2005 and 2006. The win gives the Swiss a third “sunshine” double – claiming both Masters Series crowns in Indian Wells and Miami in the same year.

Federer is the oldest-ever Miami champion.

This is the third time that No. 4 seed Federer has defeated No. 5 seed Nadal this year, fourth straight time overall. The Swiss also beat the Spaniard in final of the Australian Open and the fourth round of Indian Wells two weeks ago. Nadal still soundly dominates the career head-to-head record at 23-14.

This year also marked the thirteenth anniversary of the first time both men first played each other on the tour.

Federer came into the final, after playing an intense three-hour and ten-minute semifinal win over 21-year-old Nick Kyrgios on Friday night. In the quarterfinals, he saved match points against Tomas Berdych.

In the final, Federer broke Nadal’s serve in the penultimate game of each set. Federer hit 30 winners with 17 unforced errors. 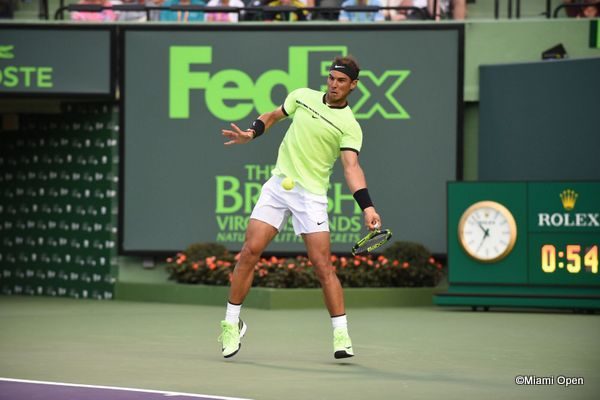 “Today was a close match in my opinion. Was 6-3, 6-4, but I had opportunities to have the break before him on the first set. I don’t believe in luck, but I was not very lucky in the first set in a couple of points that I think I played well and I lost in the break points, and that’s it.

“Then he has the break and you are in trouble.

“Few things decided the point, the decided the match, and today was for him. For me was a much closer result than — much closer level today than what the result says, and completely different than last week.

“I think that I was close,” Nadal commenting on the match. “I think I was close enough to win the first set. Was not the day. Is true that when somebody is coming with that dynamic like him that he’s winning an a lot, I know that feeling, all the things are going to your way, no?

“So that’s what happened today, because in the first set I think anything could happen. Then in the second was close. The same, one break and that’s it. That’s all. It’s easy to see that match was a close match. In my opinion anything could happen and was in his way, so well done for him.” 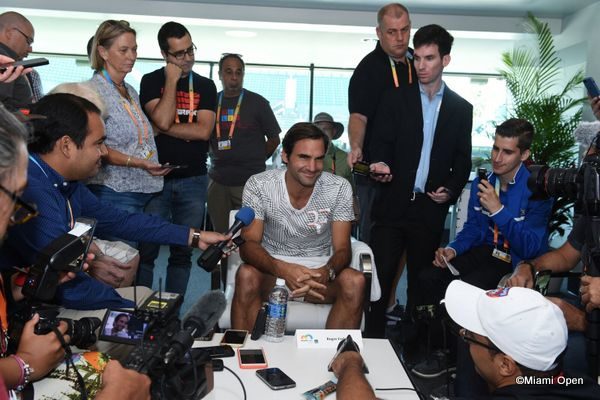 “I think it was a close match,” Federer said in his news conference. “Maybe if you didn’t see the match and you were sitting somewhere around the world and you see the score you’re like, Okay, sort of maybe just straightforward and couple breaks and that was it.

“That’s not the full story. I thought he had his chances in the first and in the second. It was close. I think on the big points today I was just a little bit better. Why, I have no explanation. I just think it fell that way today.

“It was more of a fight mode I was in today just trying to stay afloat. Physically, emotionally it’s been a draining week, so I did I did very well.

“Great atmosphere again. A lot riding on the match of course. A lot has happened here in the last, I don’t know, it’s been 12, 13 years since I played Rafa the very first time here and in between.

“So it was a special match and it was great to play against Rafa again.”

“Was a positive tournament for me obviously,” said Nadal. “A lot of points, a lot of confidence for the most important part of the season for me that’s just in two weeks.

“So I hope to have a good two weeks of practice now at home and be ready for the clay. That’s my goal now.”

“I think I am close to what I need to be,” Nadal said in his news conference. “I am at a very high level of tennis and I believe I am ready to win titles. I already played three finals this year, losing three times with a player that didn’t lose a match – only one match that he never would lose in normal conditions in Dubai and that’s it.

“I’m playing enough well to fight for everything I think. I have good hopes that I going to be ready for Monte-Carlo. Always when I am playing that well, on clay always helps a little bit more for me. I need to work hard to be ready for that. If I am ready for that, I think I am very excited about playing back on clay again.”

“I think that the way I’m playing right now is the right way for me moving forward as well,” Federer said. “Of course I’ll always recalibrate every tournament I go to depending on the speed of the ball, the speed of the courts, who I play, because I do have options.

“I’m happy that I was able to stay on the offensive more or less throughout this swing here, Indian Wells and Miami. I think once you win a big tournament like the Australian Open, or any big tournament for that matter, you can just bank usually on some confidence, you know.

“That confidence gets you through a lot of the tough matches that nobody ever speaks about again. You know, let’s make it the quarterfinals here against Berdych. End up winning that somehow. Nobody talks about it. They only will talk about the Nadal finals and the rest we know.

“I think I am definitely profiting from confidence, and then also from the right mindset, able to compress all my energy into one single match and not be distracted by everything else going on around me.

“So I think it’s been a challenging four weeks because, yeah, you have to be focused for a long time. I was able to do that and I’m very happy.”
“I’m moving up in the (rankings) and I just want to stay healthy,” Federer told ESPN’s Brad Gilbert on court after the match.

“When I’m healthy and feeling good, I can produce tennis like this. That’s why taking a break and resting during the clay season and focusing on Roland Garros, the grass and the hard courts after that is best. It would be great to be No. 1 again, but it’s a long way away.”

“Then I would like to eventually — when you take a break, a breather and you start working out again, which I will have to stay in shape to some extent because I have Match for Africa 3 in Zurich on April 1oth. I can’t let everything fall apart right now because I have to play in a week.

“After that, I’m looking forward to go back in the gym and work on the stuff I couldn’t do for the last few months.

“Yeah, so I’ll probably stay on hard courts actually for the next few months, if you like, and then I’ll get on the clay probably two weeks before the French. That’s the plan for now.

“Then, yeah, hopefully I’ll play the French, but we’ll see how all of the buildup is going to go. Then obviously for me, that’s when the season essential starts. Sounds weird now, but I see it that way and I’ve always seen it that way.”

Federer’s next focus is Wimbledon: “Wimbledon has to be the biggest goal, I mean now in the near future. The American hard courts I guess as well. The French Open I guess to some extent. It’s just we’ll see what happens, you know. No pressure there really because I won’t have a preparation as such.

“But all of the grass really is important to me because I’ll play Stuttgart and Halle there, too. Then of course I am looking very good for the World Tour Finals, for the year-end championships, where I’ve been very successful. I like the indoors as well.

“So for me basically the second half of the season is a big priority now. That’s why I’ll take a break as well.”

“There is a lot of traveling, and the knee can act funny when you travel and fly trans-Atlantic and all that stuff. It’s not like I went home and all I did is take a warm shower. I had to do a lot of stretching, massage, and sleep well, all that stuff. I needed to be very professional to wake up every morning and be ready to compete.

“I’m happy that nothing major happened throughout this period. It’s been a dream run on the court; off the court as well my body has reacted very well and I couldn’t be happier, of course.” 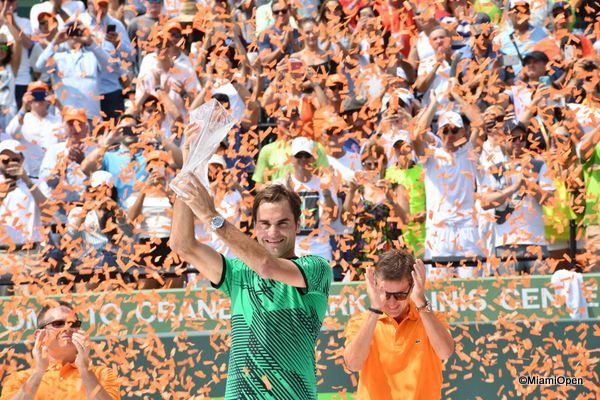 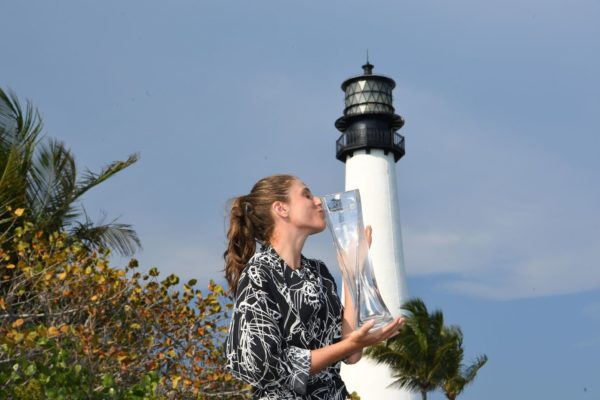 This is Konta’s third title on the WTA tour. She won Stanford last year and Sydney in January.

“And then it’s about keeping things simple and working for me. I just want to work and try to really bring out in myself the most that I have. Wherever that gets me that’s where it will get me, but hopefully the day I hang up my racquets I will be able to say that I really maximized my full ability and, my, yeah, everything inside me.” 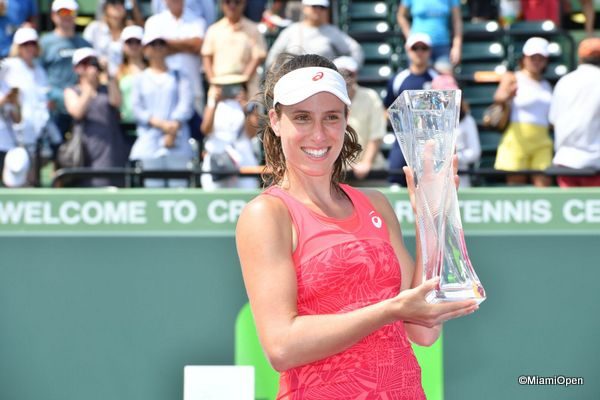 Just two years ago Konta failed to qualify for Miami and now she is the champion. Talk about a quick turnaround – two years ago she was ranked in the 140s, now she’s Top Ten.